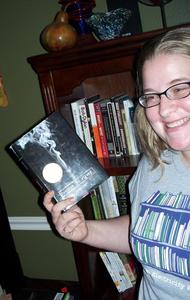 This will prevent Kellee from sending you messages, friend request or from viewing your profile. They will not be notified. Comments on discussion boards from them will be hidden by default.
Sign in to Goodreads to learn more about Kellee.

“Students will read if we give them the books, the time, and the enthusiastic encouragement to do so. If we make them wait for the one unit a year in which they are allowed to choose their own books and become readers, they may never read at all. To keep our students reading, we have to let them.”
― Donalyn Miller, The Book Whisperer: Awakening the Inner Reader in Every Child
tags: choices, reading
21 likes

“For the first time ever, I felt ashamed of my species. The volcano had taken our homes, our food, our automobiles, and our airplanes, but it hadn't taken our humanity. No, we'd given that up on our own.”
― Mike Mullin, Ashfall
122 likes

“Before she came ill, David's mother would often tell him that stories were alive. They weren't alive in the way that people were alive, or even dogs or cats. (...) Stories were different, though: they came alive in the telling. Without a human voice to read them aloud, or a pair of wide eyes following them by torch light beneath a blanket, they had no real existence in our world. (...) They lay dormant, hoping for the chance to emerge. Once someone started to read them, they could begin to change. They could take root in the imagination and transform the reader. Stories wanted to be read, David's mother would whisper. They needed it. It was the reason they forced themselves from their world into ours. They wanted us to give them life.”
― John Connolly, The Book of Lost Things
tags: books
74 likes

“They say that nobody is perfect. Then they tell you practice makes perfect. I wish they'd make up their minds.”
― Winston S. Churchill
71 likes

Gennifer Choldenko
author of: Al Capone Does My Shirts

Polls voted on by Kellee