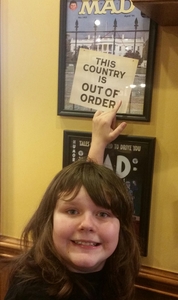 This will prevent Snotchocheez from sending you messages, friend request or from viewing your profile. They will not be notified. Comments on discussion boards from them will be hidden by default.
Sign in to Goodreads to learn more about Snotchocheez.

Snotchocheez is currently reading
Trainwreck: The Women We Love to Hate, Mock, and Fear... and Why
by Sady Doyle
bookshelves: currently-reading

Error rating book. Refresh and try again.
Rate this book
Clear rating
1 of 5 stars2 of 5 stars3 of 5 stars4 of 5 stars5 of 5 stars
progress:    (84%) "I chose Difficult Women to read as a sort of antidote for the speculative dystopia of American War, set in the South, which imagined a Second Civil War in the US. So the last thing I expected was Ms. Gay"s story "Noble Things", a futuristic tale set in the South during, yep, the Second Civil War. Yikes! It seems Roxane beat Omar El Akkad to the punch." — May 02, 2017 04:36AM

Snotchocheez is currently reading
Lincoln in the Bardo
by George Saunders
bookshelves: currently-reading

“There is no surer foundation for a beautiful friendship than a mutual taste in literature.”
― P.G. Wodehouse
tags: friendship, literature
4910 likes

“The Dr. Nuts seemed only as an acid gurgling down into his intestine. He filled with gas, the sealed valve trapping it just as one pinches the mouth of a balloon. Great eructations rose from his throat and bounced upward toward the refuse-laden bowl of the milk glass chandelier. Once a person was asked to step into this brutal century, anything could happen. Everywhere there lurked pitfalls like Abelman, the insipid Crusaders for Moorish Dignity, the Mancuso cretin, Dorian Greene, newspaper reporters, stripteasers, birds, photography, juvenile delinquents, Nazi pornographers. And especially Myrna Minkoff. The musky minx must be dealt with. Somehow. Someday. She must pay. Whatever happened, he must attend to her even if the revenge took years and he had to stalk her through decades from one coffee shop to another, from one folksinging orgy to another, from subway train to pad to cotton field to demonstration. Ignatius invoked an elaborate Elizabethan curse upon Myrna and, rolling over, frantically abused the glove once more.”
― John Kennedy Toole, A Confederacy of Dunces
7 likes

“Real miracles bother people, like strange sudden pains unknown in medical literature. It's true: They rebut every rule all we good citizens take comfort in. Lazarus obeying orders and climbing up out of the grave - now there's a miracle, and you can bet it upset a lot of folks who were standing around at the time. When a person dies, the earth is generally unwilling to cough him back up. A miracle contradicts the will of the earth.”
― Leif Enger, Peace Like a River
tags: wisdom-in-fiction
77 likes

“But I finally concluded that it is an inalienable right of lovers everywhere to become temporarily worthless to the world, it may even be their duty.”
― David James Duncan, The Brothers K
16 likes

Polls voted on by Snotchocheez