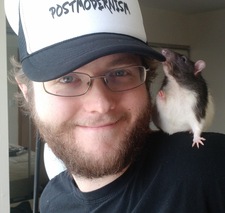 This will prevent Adam from sending you messages, friend request or from viewing your profile. They will not be notified. Comments on discussion boards from them will be hidden by default.
Sign in to Goodreads to learn more about Adam.

Adam is currently reading
Fathoms: The World in the Whale
by Rebecca Giggs
bookshelves: audiobook, currently-reading

See all 4 books that Adam is reading…

“One cringes to hear scientists cooing over the universe or any part thereof like schoolgirls over-heated by their first crush. From the studies of Krafft-Ebbing onward, we know that it is possible to become excited about anything—from shins to shoehorns. But it would be nice if just one of these gushing eggheads would step back and, as a concession to objectivity, speak the truth: THERE IS NOTHING INNATELY IMPRESSIVE ABOUT THE UNIVERSE OR ANYTHING IN IT.”
― Thomas Ligotti, The Conspiracy Against the Human Race
48 likes

Jesse Bullington
author of: The Sad Tale of the Brothers Grossbart
More…