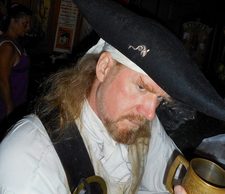 This will prevent Redsteve from sending you messages, friend request or from viewing your profile. They will not be notified. Comments on discussion boards from them will be hidden by default.
Sign in to Goodreads to learn more about Redsteve.

“One of the advantages of having led a sequestered life,' said Damerel, smiling, 'is that you've not until now encountered the sort of woman who can't refrain from quarreling with all who cross her path. She is for ever suffering slights, and is so unfortunate as to make friends only with such ill-natured persons as soon or late treat her abominably! No quarrel is ever of her seeking; she is the most amiable of created beings, and the most long-suffering. It is her confiding disposition which renders her a prey to the malevolent, who, from no cause whatsoever, invariably impose upon her, or offer her such intolerable insult that she is obliged to cut the connection.”
― Georgette Heyer, Venetia
tags: characters, narcissism, woe-is-me
1 likes

“Cruelty, like lying, repels instantly and easily because it is 'ugly.' It is a vice that disfigures human characters, not a transgression of a divine or human rule.”
― Judith N. Shklar, Ordinary Vices
tags: character, cruelty, lying, sin, ugliness, vice
5 likes

“Since the eighteenth century, clerical and military critics of liberalism have pictured it as a doctrine that achieves its public goods, peace, prosperity, and security by encouraging private vice. Selfishness in all its possible forms is said to be its essence, purpose, and outcome. This, it is said now and then, is inevitable once martial virtue and the discipline imposed by God are discarded. Nothing could be more remote from the truth. The very refusal to use public coercion to impose creedal unanimity and uniform standards of behavior demands an enormous degree of self-control. Tolerance consistently applied is more difficult and morally more demanding than repression. Moreover, the liberalism of fear, which makes cruelty the first vice, quite rightly recognizes that fear reduces us to mere reactive units of sensation and that this does impose a public ethos on us. One begins with what is to be avoided, as Montaigne feared being afraid most of all. Courage is to be prized, since it both prevents us from being cruel, as cowards so often are, and fortifies us against fear from threats, both physical and moral. This is, to be sure, not the courage of the armed, but that of their likely victims. This is a liberalism that was born out of the cruelties of the religious civil wars, which forever rendered the claims of Christian charity a rebuke to all religious institutions and parties. ... The alternative then set, and still before us, is not one between classical virtue and liberal self-indulgence, but between cruel military and moral repression and violence, and a self-restraining tolerance that fences in the powerful to protect the freedom and safety of every citizen, old or young, male or female, black or white. Far from being an amoral free-for-all, liberalism is, in fact, extremely difficult and constraining, far too much so for those who cannot endure contradiction, complexity, diversity, and the risks of freedom.”
― Judith N. Shklar, Ordinary Vices
tags: complexity, diversity, freedom, liberalism, liberty, olerance, religion, repression
1 likes

“This is what happens, perhaps, if you have been studying something so long that you can tell one sea anemone from another in an instant, could have picked out any denizen of those tidal pools from a lineup if it had committed a crime.”
― Jeff VanderMeer, Annihilation
0 likes

Polls voted on by Redsteve