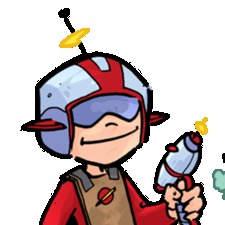 This will prevent Efreak from sending you messages, friend request or from viewing your profile. They will not be notified. Comments on discussion boards from them will be hidden by default.
Sign in to Goodreads to learn more about Efreak.

Efreak is currently reading
The Sea in You
by Jessi Sheron
bookshelves: webcomics, currently-reading

See all 4 books that Efreak is reading…

“(It was called Worldhoppers, and was about freelance explorers who extended the wormhole and ring networks into uninhabited star systems. It looked very unrealistic and inaccurate, which was exactly what I liked.)”
― Martha Wells, Artificial Condition
3 likes

“I don't know," Kerry said. "It doesn't feel like any medicine I ever took before." She raised a hand to her forehead. "It really does feel like a light, shining inside me. How did you put it there?" Maida laughed. "You're so funny! I didn't put it there. Nobody can do that—not even Raven." "But—" "It was always there. I just made it a little brighter so that you could find it.”
― Charles de Lint, Someplace to Be Flying
2 likes

“I was only 97 percent certain this meeting was a trap.”
― Martha Wells, Artificial Condition
11 likes

“These poor souls. These poor pathetic souls.” The Emperor gestured toward the passersby.
“I don’t understand,” Tommy said.
“Their time has passed and they don’t know what to do. They were told what they wanted and they believed it. They can only keep their dream alive by being with others like themselves who will mirror their illusions.”
“They have really nice shoes,” Tommy said.

“They have to look right or their peers will turn on them like starving dogs. They are the fallen gods. The new gods are producers, creators, doers. The new gods are the chinless techno-children who would rather eat white sugar and watch science-fiction films than worry about what shoes they wear. And these poor souls desperately push papers around hoping that a mystical message will appear to save them from the new, awkward, brilliant gods and their silicon-chip reality. Some of them will survive, of course, but most will fall. Uncreative thinking is done better by machines. Poor souls, you can almost hear them sweating.”
― Christopher Moore, Bloodsucking Fiends

“I’m very insecure, actually, but I have found that if you roll up screaming like a madwoman, hair on fire, guns blazing, no one is going to mention the zit on your forehead.” Which”
― Christopher Moore, Bite Me
1 likes

Hilari Bell
author of: Fall of a Kingdom

T.A. Barron
author of: The Lost Years of Merlin

Best Fantasy of the 90s

Polls voted on by Efreak