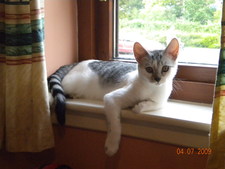 This will prevent Leah from sending you messages, friend request or from viewing your profile. They will not be notified. Comments on discussion boards from them will be hidden by default.
Sign in to Goodreads to learn more about Leah.

See all 4 books that Leah is reading…

“Coulda made something o’ himself. But a luckless man. All his days a luckless man. The kinna man woulda got two complimentary tickets for the Titanic.” The unintentional humour of her remark was like her natural appetite for life reasserting itself. Harkness couldn’t stop smiling. It was as if Glasgow couldn’t shut the wryness of its mouth even at the edge of the grave.”
― William McIlvanney, The Papers of Tony Veitch
tags: glasgow
3 likes

“Poirot sighed. He said “The world is yours, the new heaven and the new earth. In your new world, my children, let there be freedom, and let there be pity. That is all I ask.”
― Agatha Christie, One, Two, Buckle My Shoe
7 likes

“From his vantage point in Ruchill Park, Laidlaw looked out over the city. He could see so much of it from here and still it baffled him. ‘What is this place?’ he thought.

A small and great city, his mind answered. A city with its face against the wind. That made it grimace. But did it have to be so hard? Sometimes it felt so hard…It was a place so kind it would batter cruelty into the ground. And what circumstances kept giving it was cruelty. No wonder he loved it. It danced among its own debris. When Glasgow gave up, the world could call it a day.”
― William McIlvanney, The Papers of Tony Veitch

“It has never been hard to tell the difference between a Scotsman with a grievance and a ray of sunshine.”
― P.G. Wodehouse
15 likes

“But, imagining Scott’s nights here, I populated the emptiness. This had been one of his places and some small part of his spirit had been left here. Holding my own brief séance for my brother, I conjured vivid faces and loud nights. I saw that smile of his, sudden as a sunray, when he loved what you were saying. I saw the strained expression when he felt you must agree with him and couldn’t get you to see that. I caught the way the laughter would light up his eyes when he was trying to suppress it. I heard the laughing when it broke. He must have had some nights here. He had lived with such intensity. The thought was my funeral for him. Who needed possessions and career and official achievements? Life was only in the living of it. How you act and what you are and what you do and how you be were the only substance. They didn’t last either. But while you were here, they made what light there was – the wick that threads the candle-grease of time. His light was out but here I felt I could almost smell the smoke still drifting from its snuffing.”
― William McIlvanney, Strange Loyalties
tags: death, remembrance
3 likes

Polls voted on by Leah