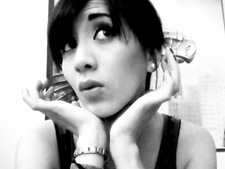 This will prevent Ariadna from sending you messages, friend request or from viewing your profile. They will not be notified. Comments on discussion boards from them will be hidden by default.
Sign in to Goodreads to learn more about Ariadna.

“I can imagine nothing more terrifying than an Eternity filled with men who were all the same. The only thing which has made life bearable…has been the diversity of creatures on the surface of the globe.”
― T.H. White, The Book of Merlyn
tags: diversity, eternity
94 likes

“He who has gone, so we but cherish his memory, abides with us, more potent, nay, more present than the living man”
― Antoine de Saint-Exupery
tags: antoine-de-saint-exupery
41 likes

“Listen, real poetry doesn't say anything; it just ticks off the possibilities. Opens all doors. You can walk through anyone that suits you.”
― Jim Morrison
tags: poetry
334 likes

“For, after all, how do we know that two and two make four? Or that the force of gravity works? Or that the past is unchangeable? If both the past and the external world exist only in the mind, and if the mind itself is controllable – what then?”
― George Orwell, 1984
tags: ethics, logic, metaphysics, ontology, philosophy, psychology, science
1015 likes

“People have stars, but they aren't the same. For travelers, the stars are guides. For other people, they're nothing but tiny lights. And for still others, for scholars, they're problems... But all those stars are silent stars. You, though, you'll have stars like nobody else... since I'll be laughing on one of them, for you it'll be as if all the stars are laughing. You'll have stars that can laugh!... and it'll be as if I had given you, instead of stars, a lot of tiny bells that know how to laugh ...”
― Antoine de Saint-Exupery, The Little Prince
184 likes

Polls voted on by Ariadna