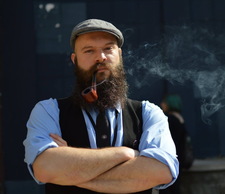 This will prevent Marko from sending you messages, friend request or from viewing your profile. They will not be notified. Comments on discussion boards from them will be hidden by default.
Sign in to Goodreads to learn more about Marko.

“I had not liked him. I had struggled against him and for him, I had cursed him and thanked him, despised him and admired him. I hated his religion and its cold disapproving gaze, its malevolence that cloaked itself in pretended kindness, and its allegiance to a god who would drain the joy from the world by naming it sin, but Alfred’s religion had made him a good man and a good king. And Alfred’s joyless soul had proved a rock against which the Danes had broken themselves. Time and again they had attacked, and time and again Alfred had out-thought them, and Wessex grew ever stronger and richer and all that was because of Alfred. We think of kings as privileged men who rule over us and have the freedom to make, break and flaunt the law, but Alfred was never above the law he loved to make. He saw his life as a duty to his god and to the people of Wessex and I have never seen a better king, and I doubt my sons, grandsons and their children’s children will ever see a better one. I never liked him, but I have never stopped admiring him. He was my king and all that I now have I owe to him. The food that I eat, the hall where I live and the swords of my men, all started with Alfred, who hated me at times, loved me at times, and was generous with me. He was a gold-giver.”
― Bernard Cornwell, Death of Kings
tags: bernard-cornwell, death-of-kings
2 likes

“Melkor's envy grew then the greater within him; and he also took visible form, but because of his mood and the malice that burned in him that form was dark and terrible. And he descended upon Arda in power and majesty greater than any other of the Valar, as a mountain that wades in the sea and has its head above the clouds and is clad in ice and crowned with smoke and fire; and the light of the eyes of Melkor was like a flame that withers with heat and pierces with a deadly cold.”
― Tolkien
tags: silmarillion, tolken
2 likes

“...it was an old saying: three could keep a secret if but two of them lay in their graves...”
― Marion Zimmer Bradley, The Mists of Avalon
1 likes

“Choose your battles,’ I snarled at Æthelstan. ‘That space between your ears was given so that you can think! If you just charge whenever you see an enemy you’ll earn yourself an early grave.’ Lord Uhtred of Bebbanburg”
― Bernard Cornwell, Warriors of the Storm
tags: bernard, cornwell, saxon-stories, warriors-of-the-storm
0 likes

“Now Melkor began the delving and building of a vast fortress, deep under Earth, beneath dark mountains where the beams of Illuin were cold and dim. That stronghold was named Utumno. And though the Valar knew naught of it as yet, nonetheless the evil of Melkor and the blight of his hatred flowed out thence, and the Spring of Arda was marred. Green things fell sick and rotted, and rivers were choked with weeds and slime, and fens were made, rank and poisonous, the breeding place of flies; and forests grew dark and perilous, the haunts of fear; and beasts became monsters of horn and ivory and dyed the earth with blood. Then the Valar knew indeed that Melkor was at work again, and they sought for his hiding place. But Melkor, trusting in the strength of Utumno and the might of his servants, came forth suddenly to war, and struck the first blow, ere the Valar were prepared; and he assailed the lights of Illuin and Ormal, and cast down their pillars and broke their lamps. In the overthrow of the mighty pillars lands were broken and seas arose in tumult; and when the lamps were spilled destroying flame was poured out over the Earth. And the shape of Arda and the symmetry of its waters and its lands was marred in that time, so that the first designs of the Valar were never after restored.”
― J.R.R. Tolkien, The Silmarillion
tags: silmarillion, tolkien
2 likes

Best Books of the 15th Century

Best Books of the 13th Century

Polls voted on by Marko