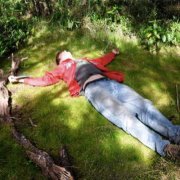 This will prevent Jonny from sending you messages, friend request or from viewing your profile. They will not be notified. Comments on discussion boards from them will be hidden by default.
Sign in to Goodreads to learn more about Jonny.

“Everybody is identical in their secret unspoken belief that way deep down they are different from everyone else.”
― David Foster Wallace, Infinite Jest
4844 likes

A U. S. of modern A. where the State is not a team or a code, but a sort of sloppy intersection of desires and fears, where the only public consensus a boy must surrender to is the acknowledged primacy of straight-line pursuing this flat and short-sighted idea of personal happiness.”
― David Foster Wallace

Polls voted on by Jonny