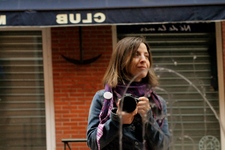 This will prevent Rouzan from sending you messages, friend request or from viewing your profile. They will not be notified. Comments on discussion boards from them will be hidden by default.
Sign in to Goodreads to learn more about Rouzan.

And a deeper silence

“When I loved myself enough, I no longer needed things or people to make me feel safe.”
― Kim McMillen, When I Loved Myself Enough
tags: self-esteem
41 likes

“When I loved myself enough, I would sometimes wake in the night to music playing within me.”
― Kim McMillen, When I Loved Myself Enough
tags: self
15 likes

“He was beautiful when he sat alone, he was like me, he had wide lapels, he was holding the mug in the hardest possible way so that his fingers were all twisted but still long and beautiful, he didn’t like to sit alone all the time, but this time, I swear, he didn’t care on way or the other.

Maybe he doesn’t mean a thing to me any more but I think he was like me.

You didn’t expect to fall in love, I said to myself and at the same time I answered gently, Do you think so?

I heard you humming beautifully, your hum said that I can’t ignore you, that I’d finally come around for a number of delicious reasons that only you knew about, and here I am, Miss Blood.

And so we changed his pain, we threw the idea of a body at him and we told him a joke, and then he thought a great deal about laughing and about the code.

And now you’ve entered the mathematical section of your soul which you claimed you never had. I suppose that this, plus the broken heart, makes you believe that now you have a perfect right to go out and tame the sadists.

He had the last line of each verse of the song but he didn’t have any of the other lines, the last line was always the same, Don’t call yourself a secret unless you mean to keep it.

He thought he knew, or he actually did know too much about singing to be a singer; and if there is actually such a condition, is anybody in it, and are sadists born there?

It is not a question mark, it is not an exclamation point, it is a full stop by the man who wrote Parasites of Heaven. Even if we stated our case very clearly and all those who held as we do came to our side, all of them, we would still be very few.”
― Leonard Cohen, Parasites of Heaven
11 likes

Polls voted on by Rouzan