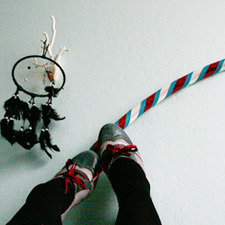 This will prevent Maria from sending you messages, friend request or from viewing your profile. They will not be notified. Comments on discussion boards from them will be hidden by default.
Sign in to Goodreads to learn more about Maria.

See all 12 books that Maria is reading…

“You don't need millions of dollars or millions of people if you're doing what you love.”
― Felicia Day
234 likes

“As he watched Joe stand, blazing, on the fire escape, Sammy felt an ache in his chest that turned out to be, as so often occurs when memory and desire conjoin with a transient effect of weather, the pang of creation. The desire he felt, watching Joe, was unquestionably physical, but in the sense that Sammy wanted to inhabit the body of his cousin, not possess it. It was, in part, a longing--common enough among the inventors of heroes--to be someone else; to be more than the result of two hundred regimens and scenarios and self-improvement campaigns that always ran afoul of his perennial inability to locate an actual self to be improved. Joe Kavalier had an air of competence, of faith in his own abilities, that Sammy, by means of constant effort over the whole of his life, had finally learned only to fake. ”
― Michael Chabon, The Amazing Adventures of Kavalier & Clay
tags: self
72 likes

“I'll tell you a terrible secret — Are you listening to me? There isn't anyone out there who isn't Seymour's Fat Lady.”
― J.D. Salinger, Franny and Zooey
54 likes

“There’s no “correct path” to becoming a real artist. You might think you’ll gain legitimacy by going to art school, getting published, getting signed to a record label. But it’s all bullshit, and it’s all in your head. You’re an artist when you say you are. And you’re a good artist when you make somebody else experience or feel something deep or unexpected.”
― Amanda Palmer, The Art of Asking; or, How I Learned to Stop Worrying and Let People Help
85 likes

Polls voted on by Maria