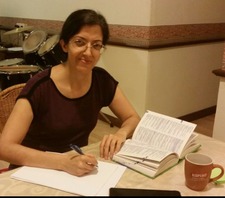 This will prevent Azita from sending you messages, friend request or from viewing your profile. They will not be notified. Comments on discussion boards from them will be hidden by default.
Sign in to Goodreads to learn more about Azita.

Azita Rassi is currently reading
A ​Sky Beyond the Storm (An Ember in the Ashes, #4)
by Sabaa Tahir (Goodreads Author)
bookshelves: currently-reading

Nectar in a Sieve by Kamala Markandaya
5 highlights
How quickly children grow! They are infants -- you look away a minute and in that time they have left their babyhood behind.
Sam toer liked this
See Azita Rassi’s 11 books with notes and highlights…

“she wonders whether the Holy Ghost, conventionally represented as a dove, would not be better portrayed as a parrot. Logic is certainly on her side: parrots and Holy Ghosts can speak, whereas doves cannot.”
― Julian Barnes, Flaubert's Parrot
0 likes

“No young person on earth is so excellent in all respects as to need no uncritical love. Good Lord—as youngsters play their parts in political tragedies with casts of billions, uncritical love is the only real treasure they can look for.”
― Kurt Vonnegut, Mother Night
0 likes

“How quickly children grow! They are infants -- you look away a minute and in that time they have left their babyhood behind.”
― Kamala Markandaya, Nectar in a Sieve
2 likes

“But, regardless of that subject, Jones managed to go from it to a theory that was all his own—that the teeth of Jews and Negroes proved beyond question that both groups were degenerate.”
― Kurt Vonnegut, Mother Night
0 likes

“This news, that I had broadcast the coded announcement of my Helga’s disappearance, broadcast it without even knowing what I was doing, somehow upset me more than anything in the whole adventure. It upsets me even now. Why, I don’t know. It represented, I suppose a wider separation of my several selves than even I can bear to think about. At that climactic moment in my life, when I had to suppose that my Helga was dead, I would have liked to mourn as an agonized soul, indivisible. But no. One part of me told the world of the tragedy in code. The rest of me did not even know that the announcement was being made.”
― Kurt Vonnegut, Mother Night
0 likes

Polls voted on by Azita