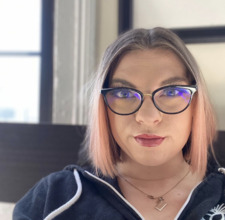 Erin Staples is currently reading
I'm a Therapist, and My Patient is Going to be the Next School Shooter: 6 Patient Files That Will Keep You Up At Night (Dr. Harper Therapy, #1)
by Dr. Harper
bookshelves: currently-reading

See all 22 books that Erin is reading…

“To stand apart is to take the view of the outsider without leaving, always oriented toward what it is that you would have left. It means not fleeing your enemy, but knowing your enemy, which turns out not to be the world, but the channels through which you encounter it day-to-day. It also means giving yourself the critical break that media cycles and narratives will not, allowing yourself to believe in another world while living in this one. Unlike the libertarian blank slate that appeals to outer space, or even the communes that sought to break with historical time, this “other world” is not a rejection of the one we live in. Rather, it is a perfect image of this world when justice has been realized with and for everyone and everything that is already here. To stand apart is to look at the world (now) from the point of view of the world as it could be (the future), with all of the hope and sorrowful contemplation that this entails.”
― Jenny Odell, How to Do Nothing: Resisting the Attention Economy
10 likes