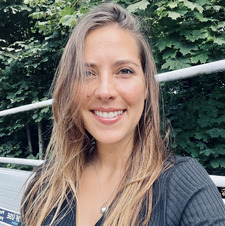 This will prevent Leah from sending you messages, friend request or from viewing your profile. They will not be notified. Comments on discussion boards from them will be hidden by default.
Sign in to Goodreads to learn more about Leah.

See all 10 books that Leah is reading…

“For many women,’ she said, ‘having a child is their central experience of creativity, and yet the child will never remain a created object; unless,’ she said, ‘the mother’s sacrifice of herself is absolute, which mine never could have been, and which no woman’s ought to be these days.”
― Rachel Cusk, Outline
11 likes

“All you San Franciscos will have to fall eventually and burn again.”
― Jack Kerouac
0 likes

“I copied out a passage from Lord Jim: “We wander in our thousands over the face of the earth, the illustrious and the obscure, earning beyond the seas our fame, our money, or only a crust of bread; but it seems to me that for each of us going home must be like going to render an account.”
― William Finnegan, Barbarian Days: A Surfing Life
3 likes

“He had many friends – smart, aspirational people of good taste – who had planted a jacaranda tree in their new garden as though this law of nature somehow didn’t apply to them and they could make it grow by the force of their will. After a year or two they would become frustrated and complain that it had barely increased even an inch. But it would take twenty, thirty, forty years for one of these trees to grow and yield its beautiful display, he said smiling: when you tell them this fact they are horrified, perhaps because they can’t imagine remaining in the same house or indeed the same marriage for so long, and they almost come to hate their jacaranda tree, he said, sometimes even digging it up and replacing it with something else, because it reminds them of the possibility that it is patience and endurance and loyalty – rather than ambition and desire – that bring the ultimate rewards. It is almost a tragedy, he said, that the same people who are capable of wanting the jacaranda tree and understanding its beauty are incapable of nurturing one themselves.”
― Rachel Cusk, Kudos
6 likes

Polls voted on by Leah