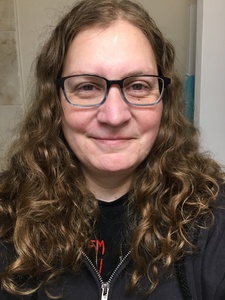 Anna is currently reading
Nice White Ladies: The Truth about White Supremacy, Our Role in It, and How We Can Help Dismantle It
by Jessie Daniels
bookshelves: currently-reading

“Mostly something called Sanctuary Moon.” He shook his head, dismissing it. “It’s probably using it to encode data for the company. It can’t be watching it, not in that volume; we’d notice.” I snorted. He underestimated me. Ratthi said, “The one where the colony’s solicitor killed the terraforming supervisor who was the secondary donor for her implanted baby?” Again, I couldn’t help it. I said, “She didn’t kill him, that’s a fucking lie.” Ratthi turned to Mensah. “It’s watching it.”
― Martha Wells, All Systems Red
43 likes

“But you want murderous feelings? Hang around librarians," confided Gamache. "All that silence. Gives them ideas.”
― Louise Penny, A Rule Against Murder
tags: librarians
134 likes

“She’s a barbarian, but don’t hold it against her. She’s brilliant.”
― Arkady Martine, A Desolation Called Peace
9 likes

“I could have become a mass murderer after I hacked my governor module, but then I realized I could access the combined feed of entertainment channels carried on the company satellites. It had been well over 35,000 hours or so since then, with still not much murdering, but probably, I don't know, a little under 35,000 hours of movies, serials, books, plays, and music consumed. As a heartless killing machine, I was a terrible failure.”
― Martha Wells, All Systems Red
tags: entertainment, humor, media, murder
218 likes

“Not all librarians are evil cultists. Some librarians are instead vengeful undead who want to suck your soul.”
― Brandon Sanderson (Alcatraz Smedry), Alcatraz Versus the Scrivener's Bones
tags: alcatraz-smedry, humor, librarians
72 likes