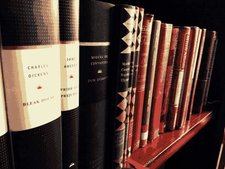 “Trauma is the ultimate experience of “this will last forever.”
― Bessel van der Kolk, The Body Keeps the Score: Brain, Mind, and Body in the Healing of Trauma
tags: healing, healing-the-past, mental-health, trauma
1 likes

“You force me to tell you with words; I could say it a thousand times better without words. With words I can give you nothing! With words I can't learn from you, nor you from me.”
― Hermann Hesse, Narcissus and Goldmund
tags: love, words
1 likes

“We are transitory, we are becoming, we are potentials; there is no perfection for us, no complete being. But whatever we go, from potential to deed, from possibility to realization, we participate in true being, become by a degree more similar to the perfect and divine. That is what it means to realize oneself.”
― Hermann Hesse, Narcissus and Goldmund
tags: authenticity, becoming, perfection, self-actualization, self-improvement
0 likes

“The library, then, at seven-fifteen, seven-thirty, seven-forty-five of a Sunday night, cloistered with great drifts of silence and transfixed avalanche of books poised like the cuneiform stones of eternity on shelves, so high the unseen snows of time fell all year there.”
― Ray Bradbury, Something Wicked This Way Comes
tags: libraries, ray-bradbury, something-wicked-this-way-comes
1 likes

“The vibrating sounds of a big brass bell reached them from the town. Nekhludoff’s driver, who stood by his side, and the other men on the raft raised their caps and crossed themselves, all except a short,
dishevelled old man, who stood close to the railway and whom Nekhludoff had not noticed before. He did not cross himself, but raised his head and looked at Nekhludoff. This old man wore a patched coat, cloth trousers and worn and patched shoes. He had a small wallet on his back, and a high fur cap with the fur much rubbed on his head.

“Why don’t you pray, old chap?” asked Nekhludoff’s driver as he replaced and straightened his cap. “Are you unbaptized?”

“Who’s one to pray to?” asked the old man quickly, in a determinately aggressive tone.

“To whom? To God, of course,” said the driver sarcastically.

“And you just show me where he is, that god.” There was something so serious and firm in the expression of the old man, that the driver felt that he had to do with a strong-minded man, and was a bit abashed. And trying not to show this, not to be silenced, and not to be put to shame before the crowd that was observing them, he answered quickly.

“Where? In heaven, of course.”

“And have you been up there?”

“Whether I’ve been or not, every one knows that you must pray to God.”

“No one has ever seen God at any time. The only begotten Son who is in the bosom of the Father he hath declared him,” said the old man in the same rapid manner, and with a severe frown on his brow.

“It’s clear you are not a Christian, but a hole worshipper. You pray to a hole,” said the driver, shoving the handle of his whip into his girdle, pulling straight the harness on one of the horses.

“What is your faith, Dad?” asked a middle-aged man, who stood by his cart on the same side of the raft.

“I have no kind of faith, because I believe no one--no one but myself,” said the old man as quickly and decidedly as before.

“How can you believe yourself?” Nekhludoff asked, entering into a conversation with him. “You might make a mistake.”

“Never in your life,” the old man said decidedly, with a toss of his head.

“Then why are there different faiths?” Nekhludoff asked.

“It’s just because men believe others and do not believe themselves that there are different faiths. I also believed others, and lost myself as in a swamp,--lost myself so that I had no hope of finding my way out. Old believers and new believers and Judaisers and Khlysty and Popovitzy,
and Bespopovitzy and Avstriaks and Molokans and Skoptzy--every faith
praises itself only, and so they all creep about like blind puppies. There are many faiths, but the spirit is one--in me and in you and in him. So that if every one believes himself all will be united. Every one be himself, and all will be as one.”

The old man spoke loudly and often looked round, evidently wishing that as many as possible should hear him.

“And have you long held this faith?”

“I? A long time. This is the twenty-third year that they persecute me.”

“As they persecuted Christ, so they persecute me. They seize me, and take me before the courts and before the priests, the Scribes and the Pharisees. Once they put me into a madhouse; but they can do nothing because I am free. They say, ‘What is your name?’ thinking I shall name
myself. But I do not give myself a name. I have given up everything: I have no name, no place, no country, nor anything. I am just myself. ‘What is your name?’ ‘Man.’ ‘How old are you?’ I say, ‘I do not count my
years and cannot count them, because I always was, I always shall be.’ ‘Who are your parents?’ ‘I have no parents except God and Mother Earth. God is my father.’ ‘And the Tsar? Do you recognise the Tsar?’ they say. I say, ‘Why not? He is his own Tsar, and I am my own Tsar.’ ‘Where’s the good of talking to him,’ they say, and I say, ‘I do not ask you to talk to me.’ And so they begin tormenting me.”
― Leo Tolstoy, Resurrection


More of The Scrivener's Quill’s quotes…

READING
CHALLENGE
The Scrivener's Quill has read 173 books of his goal of 150!
115%
View Books
View more

The Scrivener's Quill’s Year In Books

People The Scrivene... is Following

Polls voted on by The Scrivener's Quill

Lists liked by The Scrivener's Quill