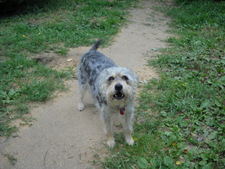 Christine is currently reading
The Sign of the Nine (Warlock Holmes #4)
by G.S. Denning
bookshelves: currently-reading

Thrall: Poems by Natasha Trethewey
4 highlights
the hands now     of their captors, those            they’ve named savages,     do they say the word itself savagely—hissing   that first letter,     the serpent’s image
See Christine’s 111 books with notes and highlights…

“I don't understand exactly what's going on, but Goodreads shouldn't be deleting reviews, period. People are smart enough to look at them on their own and make up their mind, and deleting reviews undermines the integrity of the site.”
― Brett J. Talley
81 likes

“No, it's not gun-holder, it's Gunhilda.”
― Hallgrímur Helgason, The Hitman's Guide to Housecleaning
7 likes

“Have - have you got an appointment?' he said.
'I don't know,' said Carrot. 'Have we got an appointment?'
'I've got an iron ball with spikes on,' Nobby volunteered.
'That's a morningstar, Nobby.'
'Is it?'
'Yes,' said Carrot. 'An appointment is an engagement to see someone, while a morningstar is a large lump of metal used for viciously crushing skulls. It is important not to confuse the two, isn't it, Mr-?' He raised his eyebrows.
'Boffo, sir. But-'
'So if you could perhaps run along and tell Dr Whiteface we're here with an iron ball with spi- What am I saying? I mean, without an appointment to see him? Please? Thank you.”
― Terry Pratchett, Men at Arms

The Feminist Readers' Network — 1030 members — last activity Dec 14, 2019 08:24AM
A space for people interested in and supportive of feminism, feminist literature, and feminist theory.

The Outpost — 132 members — last activity 0 minutes ago
A community of readers and friends from around the world - we may have met somewhere else, but we're here now!