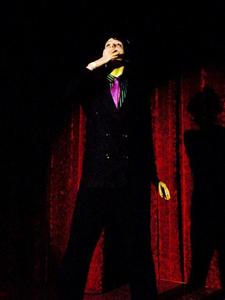 This will prevent Sasha from sending you messages, friend request or from viewing your profile. They will not be notified. Comments on discussion boards from them will be hidden by default.
Sign in to Goodreads to learn more about Sasha.

Sasha is currently reading
How to Stop Feeling Like Sh*t: 14 Habits that Are Holding You Back from Happiness
by Andrea Owen (Goodreads Author)
bookshelves: currently-reading

Sasha is currently reading
The Business of Botanicals: Exploring the Healing Promise of Plant Medicines in a Global Industry
by Ann Armbrecht (Goodreads Author)
bookshelves: currently-reading

“Words are the oldest information storage and retrieval system ever devised. Words are probably older than the cave paintings in France, words have been here for tens of thousands of years longer than film, moving pictures, video, and digital video, and words will likely be here after those media too. When the electromagnetic pulse comes in the wake of the nuclear blast? Those computers and digital video cameras and videotape recorders that are not melted outright will be plastic and metal husks used to prop open doors. Not so with the utterances of tongues. Words will remain, and the highly complicated and idiosyncratic accounts assembled from them will provide us with the dark news about the blast. The written word will remain, scribbled on collapsed highway overpasses, as a testament to love and rage, as evidence of the wanderers in the ruin.”
― Rick Moody, The Ice Storm
10 likes

“If there is no love in the world, we will make a new world, and we will give it walls, and we will furnish it with soft, red interiors, from the inside out, and give it a knocker that resonates like a diamond falling to a jeweller's felt so that we should never hear it. Love me, because love doesn't exist, and I have tried everything that does.”
― Jonathan Safran Foer, Everything Is Illuminated
tags: life, love
2103 likes

“I crave your mouth, your voice, your hair.
Silent and starving, I prowl through the streets.
Bread does not nourish me, dawn disrupts me, all day
I hunt for the liquid measure of your steps.

I hunger for your sleek laugh,
your hands the color of a savage harvest,
hunger for the pale stones of your fingernails,
I want to eat your skin like a whole almond.

and I pace around hungry, sniffing the twilight,
hunting for you, for your hot heart,
Like a puma in the barrens of Quitratue.”
― Pablo Neruda
tags: love, poetry
3770 likes

“I suppose I should say that I treasure blasphemy, as a faith of the highest order.”
― Rick Moody
2 likes

“The power of a glance has been so much abused in love stories, that it has come to be disbelieved in. Few people dare now to say that two beings have fallen in love because they have looked at each other. Yet it is in this way that love begins, and in this way only.”
― Victor Hugo, Les Misérables
tags: attraction, love
2586 likes

Warren Ellis
author of: Transmetropolitan, Vol. 1: Back on the Street
More…

Polls voted on by Sasha