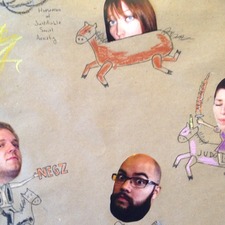 This will prevent Kyle from sending you messages, friend request or from viewing your profile. They will not be notified. Comments on discussion boards from them will be hidden by default.
Sign in to Goodreads to learn more about Kyle.

Kyle Wild is currently reading
Sex at Dawn: How We Mate, Why We Stray, and What It Means for Modern Relationships
by Christopher Ryan (Goodreads Author)
bookshelves: currently-reading

“Humans said one thing with their bodies and another with their mouths and everyone had to spend time and energy figuring out what they really meant. And once we did understand them, the Humans got angry and acted as though we had stolen thoughts from their minds.”
― Octavia E. Butler, Lilith's Brood
0 likes

“What do you think magic is for?” “I dunno. Don’t answer a question with a question.” “I used to think about this a lot,” Quentin said. “I mean, it’s not obvious like it is in books. It’s trickier. In books there’s always somebody standing by ready to say hey, the world’s in danger, evil’s on the rise, but if you’re really quick and take this ring and put it in that volcano over there everything will be fine. “But in real life that guy never turns up. He’s never there. He’s busy handing out advice in the next universe over. In our world no one ever knows what to do, and everyone’s just as clueless and full of crap as everyone else, and you have to figure it all out by yourself. And even after you’ve figured it out and done it, you’ll never know whether you were right or wrong. You’ll never know if you put the ring in the right volcano, or if things might have gone better if you hadn’t. There’s no answers in the back of the book.”
― Lev Grossman, The Magician's Land
6 likes

“There is probably no better or more reliable measure of whether a woman has spent time in ugly duckling status at some point or all throughout her life than her inability to digest a sincere compliment. Although it could be a matter of modesty, or could be attributed to shyness- although too many serious wounds are carelessly written off as "nothing but shyness"- more often a compliment is stuttered around about because it sets up an automatic and unpleasant dialogue in the woman's mind.

If you say how lovely she is, or how beautiful her art is, or compliment anything else her soul took part in, inspired, or suffused, something in her mind says she is undeserving and you, the complimentor, are an idiot for thinking such a thing to begin with. Rather than understand that the beauty of her soul shines through when she is being herself, the woman changes the subject and effectively snatches nourishment away from the soul-self, which thrives on being acknowledged."

"I must admit, I sometimes find it useful in my practice to delineate the various typologies of personality as cats and hens and ducks and swans and so forth. If warranted, I might ask my client to assume for a moment that she is a swan who does not realzie it. Assume also for a moment that she has been brought up by or is currently surrounded by ducks.

There is nothing wrong with ducks, I assure them, or with swans. But ducks are ducks and swans are swans. Sometimes to make the point I have to move to other animal metaphors. I like to use mice. What if you were raised by the mice people? But what if you're, say, a swan. Swans and mice hate each other's food for the most part. They each think the other smells funny. They are not interested in spending time together, and if they did, one would be constantly harassing the other.

But what if you, being a swan, had to pretend you were a mouse? What if you had to pretend to be gray and furry and tiny? What you had no long snaky tail to carry in the air on tail-carrying day? What if wherever you went you tried to walk like a mouse, but you waddled instead? What if you tried to talk like a mouse, but insteade out came a honk every time? Wouldn't you be the most miserable creature in the world?

The answer is an inequivocal yes. So why, if this is all so and too true, do women keep trying to bend and fold themselves into shapes that are not theirs? I must say, from years of clinical observation of this problem, that most of the time it is not because of deep-seated masochism or a malignant dedication to self-destruction or anything of that nature. More often it is because the woman simply doesn't know any better. She is unmothered.”
― Clarissa Pinkola Estés, Women Who Run With the Wolves: Myths and Stories of the Wild Woman Archetype
tags: modesty
471 likes

Computer Science — 150 members — last activity Oct 27, 2018 02:18AM
Group to catalog computer science and software engineering. Please add books you are currently reading or have read, and would recommend to others.

Polls voted on by Kyle