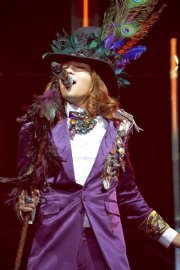 This will prevent Kristin from sending you messages, friend request or from viewing your profile. They will not be notified. Comments on discussion boards from them will be hidden by default.
Sign in to Goodreads to learn more about Kristin.

“Okay,' he said. He took a breath. 'What would you do, if you could do anything?'
I took a step toward him, closing the space between us. 'This,' I said. And then I kissed him.
Kissed him. There, in the middle of the street, as the world went on around us. Behind me, I knew Jason was still waiting for an explanation, my sister was still lecturing, and that angel still had her eyes skyward, waiting to fly. As for me, I was just trying to get it right, whatever that meant. But now I finally felt I was on my way. Everyone had a forever, but given a choice, this would be mine. The one that began in this moment, with Wes, in a kiss that took my breath away, then gave it back- leaving me astounded, amazed, and most of all, alive.”
― Sarah Dessen, The Truth About Forever

“It was just one of those things," I said, "You know, that just happen. You don't think or plan. You just do it.”
― Sarah Dessen, The Truth About Forever
tags: un, unthinkable, unthought
1627 likes

“Grief can be a burden, but also an anchor. You get used to the weight, how it holds you in place.”
― Sarah Dessen, The Truth About Forever
tags: bereavement, grief
1009 likes

“Life can be long or short, it all depends on how you choose to live it. it's like forever, always changing. for any of us our forever could end in an hour, or a hundred years from now. you can never know for sure, so you'd better make every second count. what you have to decide is how you want your life to be. if your forever was ending tomorrow, is this how you'd want to have spent it?”
― Sarah Dessen, The Truth About Forever
tags: the-truth-about-forever
888 likes

Katherine Applegate
author of: The One and Only Ivan

Carolyn Mackler
author of: The Earth, My Butt, and Other Big Round Things
More…

Polls voted on by Kristin