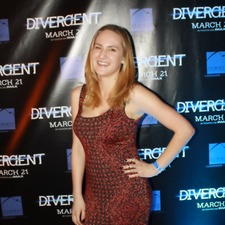 This will prevent Bailey from sending you messages, friend request or from viewing your profile. They will not be notified. Comments on discussion boards from them will be hidden by default.
Sign in to Goodreads to learn more about Bailey.

“You will lose what you value most, so treasure it while you can.”
― Richelle Mead, Shadow Kiss
2664 likes

“I was born into Bolívar's labyrinth, and so I must believe in the hope of Rabelais' Great Perhaps.”
― John Green
tags: inspirational
286 likes

“The spell. Victor said you had to want me... to care about me... for it to work." When he didn't say anything, I tried to grip his shirt, but my fingers were too weak. "Did you? Did you want me?"
His words came out thickly. "Yes, Roza. I did want you. I still do. I wish... we could be together."
"Then why did you lie to me?"
We reached the clinic, and he managed to open the door while still holding me. As soon as he stepped inside, he began yelling for help.
"Why did you lie?" I murmured again.
Still holding me in his arms, he looked down at me. I could hear voices and footsteps getting closer.
"Because we can't be together."
"Because of the age thing, right?" I asked. "Because you're my mentor?"
His fingertip gently wiped away a tear that had escaped down my cheek. "That's part of it," he said. "But also... well, you and I will both be Lissa's gaurdians someday. I need to protect her at all cost. If a pack of Strogoi come, I need to throw my body between them and her."
I know that. Of course that's what you have to do." The black sparkles were dancing in front of my eyes again. I was fading out.
"No. If I let myself love you, I won't throw myself in front of her. I'll throw myself in front of you.”
― Richelle Mead, Vampire Academy
tags: dimitri, rose, vampire-academy
3001 likes

“Books are the ultimate Dumpees: put them down and they’ll wait for you forever; pay attention to them and they always love you back.”
― John Green, An Abundance of Katherines
tags: books, reading
16722 likes

“Never trust anyone who has not brought a book with them.”
― Lemony Snicket, Horseradish
tags: books, reading
27436 likes

Tea Time Readers — 41 members — last activity Mar 02, 2017 01:51AM
We're all mad here! Hello fellow booklovers We're all mad here! Hello fellow booklovers <3 Welcome to our tea (book) party! This is a book club where we each month read a new (mainly young adult) book. We hope you will join us in August for our first read along! We will announce the botm worry soon. Follow us on instagram for updates (@teatimereaders) ...more

Polls voted on by Bailey