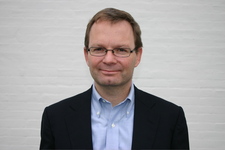 This will prevent Martin from sending you messages, friend request or from viewing your profile. They will not be notified. Comments on discussion boards from them will be hidden by default.
Sign in to Goodreads to learn more about Martin.

Martin von Haller Groenbaek is currently reading
The Most Human Right: Why Free Speech Is Everything
by Eric Heinze
bookshelves: currently-reading

See all 8 books that Martin is reading…

“Given current laws, trust is our only option.”
― Bruce Schneier, Data and Goliath: The Hidden Battles to Collect Your Data and Control Your World
1 likes

“In China, often only the practice of infanticide makes marriage and family life possible.  In all the major towns, parents annually abandon many children in the streets or drown them like unwanted puppies.  Some people even make a living out of performing infanticide contracts for money.”
― Adam Smith, The Wealth of Nations in Modern English: An easier-to-read current language version of the 1776 classic
0 likes

“We wanted work of the imagination. Fiction. Consciousness captured on the page. Storytelling. No essay, no memoir, no reportage. No selfies with a bit of Photoshop to pass it off as fiction. Story that is peeled from the merely testimonial, from the very tiresome use and abuse of the first person. Originality. Attitude. Yeah, attitude. Writers writing like their lives depended on it. Writers writing about things I had no idea I was interested in. Writers channeling the worlds of the inarticulate, who have not spoken for themselves or whom we cannot hear. Things that are familiar made strange or re-enchanted. Writers like the ones who came before. The ones who didn’t know about Instagram. Writers who are not readers, but rereaders. Who you think may, at some point in the future, put sentences together that will cause your spine to tingle and the hair on the nape of your neck to stand on end. Who can do it now. Writers who dare, whose ambition may have gotten the best of them, but tried anyway. That’s a tough order for a young writer, but that was our bar, and we were willing to read with an eye to the future.”
― Sigrid Rausing, Granta 155: Best of Young Spanish-Language Novelists 2
0 likes

“a rational analysis of the consequences of a decision does not make the decision rational; the consequences do not determine our decision; it is always we who decide.”
― Karl Popper, The Open Society and Its Enemies
4 likes

“Keep as few secrets as possible. The remaining ones will be easier to protect.”
― David Brin, The Transparent Society: Will Technology Force Us To Choose Between Privacy And Freedom?
0 likes

Polls voted on by Martin