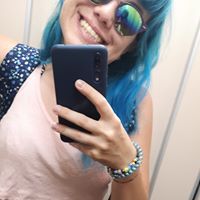 This will prevent marta from sending you messages, friend request or from viewing your profile. They will not be notified. Comments on discussion boards from them will be hidden by default.
Sign in to Goodreads to learn more about marta.

marta is currently reading
You Have a Match
by Emma Lord (Goodreads Author)
bookshelves: currently-reading, audio-books, english, ya

“It's superb to be out in the early, early morning before the sun comes up. There's this sense of being super-alive. You're in on a secret that all the dull, sleeping people don't know about. Unlike them, you're alert and aware of existing right here in this precise moment between what happened and what's going to happen.”
― Tim Tharp, The Spectacular Now
157 likes

“Hell is the absence of the people you long for.”
― Emily St. John Mandel, Station Eleven
1076 likes

“Maybe a friend is someone who wants your updates. Even if they're boring. Or sad. Or annoyingly cutesy. A friend says "Sign me up for your boring crap, yes indeed"--because he likes you anyways. He'll tolerate your junk”
― E. Lockhart, Real Live Boyfriends: Yes. Boyfriends, Plural. If My Life Weren't Complicated, I Wouldn't Be Ruby Oliver
tags: friendship, funny, sweet, true
106 likes

“You can be just friends with people, you know," Orla said. "I think it's crazy how you're in love with all those raven boys."

Orla wasn't wrong, of course. But what she didn't realize about Blue and her boys was that they were all in love with one another. She was no less obsessed with them than they were with her, or one another, analyzing every conversation and gesture, drawing out every joke into a longer and longer running gag, spending each moment either with one another or thinking about when next they would be with one another. Blue was perfectly aware that it was possible to have a friendship that wasn't all-encompassing, that wasn't blinding, deafening, maddening, quickening. It was just that now that she'd had this kind, she didn't want the other.”
― Maggie Stiefvater, Blue Lily, Lily Blue

Polls voted on by marta