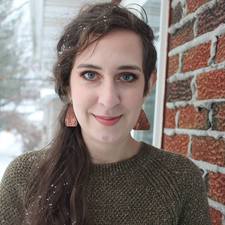 This will prevent Idzie from sending you messages, friend request or from viewing your profile. They will not be notified. Comments on discussion boards from them will be hidden by default.
Sign in to Goodreads to learn more about Idzie.

See all 27 books that Idzie is reading…

“Really, Sunborn? No, really. All right then. Tell me about computers.” “Well . . .” Luke said, and looked shifty about the eyes. “They’re boxes . . . but you can write things in them. And read things in them. And there are cats in them who are funny for some reason. They’re like—boxes of infinity. And! You keep the wikipedia in them!”
― Sarah Rees Brennan, In Other Lands
22 likes

“Nuryevet wasn't a real thing--it was a story that people told one another. An idea they constructed in fantasy and then in stone and mortar, in lines of ink in labyrinthine law books, in cities and roads. It was a map, if you will, drawn on a one-to-one scale and laid out over the whole landscape like so much smothering cloth. So when I say there was nothing in Nuryevet worth saving, that's what I mean: the story wasn't worth saving, and none of its monstrous whelps were either--the government, their methods, the idea that they could feed their poor to the story like cattle to a sea monster so the wealthy could eat its leavings.”
― Alexandra Rowland, A Conspiracy of Truths
tags: nationalism, politics, stories
2 likes

“I do not know if you are not interested, or protecting yourself, but you cannot guard yourself against the whole world. You only succeed in placing a barrier between yourself from the world." He hesitated. "I know that from personal experience.”
― Sarah Rees Brennan, In Other Lands
tags: bravery, inspirational, philosophy
20 likes

“Why is language in the Borderlands so weird? Some of it’s modern, and some of it’s medieval, and I guess that makes sense with the influx of a certain amount of new blood to the training camp every year, but how do some words and phrases transfer, while others don’t? Why do you know the word ‘jerk’ and not the word ‘bisexual’?”
“I guess people say the first word more,” said Luke.”
― Sarah Rees Brennan, In Other Lands
tags: bisexuality
18 likes

Polls voted on by Idzie