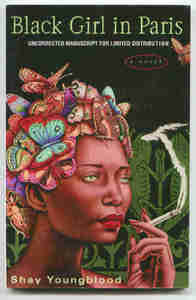 This will prevent Nina from sending you messages, friend request or from viewing your profile. They will not be notified. Comments on discussion boards from them will be hidden by default.
Sign in to Goodreads to learn more about Nina.

Nina is currently reading
How to Do Nothing: Resisting the Attention Economy
by Jenny Odell (Goodreads Author)
bookshelves: currently-reading

Nina is currently reading
Under the Knife
by Krista Franklin
bookshelves: currently-reading

“And I was alone, had been for a while, and might be for a while, but it no longer frightened me the way it had. I was discovering something terrifyingly simple: there was absolutely nothing I could do about it. I was discovering this in the way, I suppose, that everybody does, but having tried, endlessly, to do something about it. You attach yourself to someone, or you allow someone to attach themselves to you. This person is not for you, and you, really, are not for that person--and that's it, son. But you try, you both try. The only result of all your trying is to make absolutely real the unconquerable distance between you: to dramatize, in a million ways, the absolutely unalterable truth of this distance. Side by side, and hand in hand, your sunsets, nevertheless are not occurring in the same universe. It is not merely that the rain falls differently on each of you, for that can be a wonder and a joy: it is that what is rain for the one is not rain for the other. Your elements will not mix, unless one agrees that the elements be pulverized--and the result of that is worse than being alone. The result of that is to become one of the living dead. The most dreadful people I have ever known are those who have been "saved," as they claim, by Christ--they could not possibly be more deluded--those for whom the heavenly telephone is endlessly ringing, always with disastrous messages for everybody else. Or those people who have been cured by their psychiatrists, a cure which has rendered them a little less exciting than oatmeal. I prefer sinners and madmen, who can learn, who can change, who can teach--or people like myself, if I may say so, who are not afraid to eat a lobster alone as they take on their shoulders the monumental weight of thirty years.”
― James Baldwin, Just Above My Head
8 likes

“In a fractal conception, I am a cell-sized unit of the human organism, and I have to use my life to leverage a shift in the system by how I am, as much as with the things I do. This means actually being in my life, and it means bringing my values into my daily decision making. Each day should be lived on purpose.”
― Adrienne Maree Brown, Emergent Strategy: Shaping Change, Changing Worlds
tags: emergent-strategy, fractals, organizing, self-help
14 likes

“Thus she returned to the theme of ‘before,’ but in a different way than she had at first. She said that we didn’t know anything, either as children or now, that we were therefore not in a position to understand anything, that everything in the neighborhood, every stone or piece of wood, everything, anything you could name, was already there before us, but we had grown up without realizing it, without ever even thinking about it. Not just us. Her father pretended that there had been nothing before. Her mother did the same, my mother, my father, even Rino… <…> They didn’t know anything, they wouldn’t talk about anything. Not Fascism, not the king. No injustice, no oppression, no exploitation … And they thought that what had happened before was past and, in order to live quietly, they placed a stone on top of it, and so, without knowing it, they continued it, they were immersed in the things of before, and we kept them inside us, too.”
― Elena Ferrante, My Brilliant Friend
tags: awakening, before, heritage, history
30 likes

“You won’t understand what I mean now, but someday you will: the only trick of friendship, I think, is to find people who are better than you are—not smarter, not cooler, but kinder, and more generous, and more forgiving—and then to appreciate them for what they can teach you, and to try to listen to them when they tell you something about yourself, no matter how bad—or good—it might be, and to trust them, which is the hardest thing of all. But the best, as well.”
― Hanya Yanagihara, A Little Life
1854 likes

“Why wasn’t friendship as good as a relationship? Why wasn’t it even better? It was two people who remained together, day after day, bound not by sex or physical attraction or money or children or property, but only by the shared agreement to keep going, the mutual dedication to a union that could never be codified.”
― Hanya Yanagihara, A Little Life
1033 likes

Polls voted on by Nina