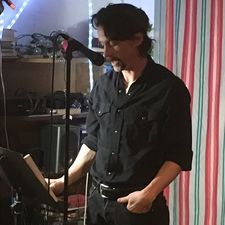 This will prevent Jimmy from sending you messages, friend request or from viewing your profile. They will not be notified. Comments on discussion boards from them will be hidden by default.
Sign in to Goodreads to learn more about Jimmy.

Jimmy is currently reading
The Structure of the Japanese Language
by Susumu Kuno
bookshelves: currently-reading

See all 4 books that Jimmy is reading…

“But are there philosophical problems? The present position of English philosophy - my point of departure - originates, I believe, in the late Professor Ludwig Wittgenstein's doctrine that there are none; that all genuine problems are scientific problems; that the alleged propositions or theories of philosophy are pseudo-propositions or pseudo-theories; that they are not false (if they were false, their negations would be true propositions or theories) but strictly meaningless combinations of words, no more meaningful than the incoherent babbling of a child who has not yet learned to speak properly.”
― Karl R. Popper, Conjectures and Refutations: The Growth of Scientific Knowledge
12 likes

“How can I accept the Communist doctrine, which sets up as its bible, above and beyond criticism, an obsolete textbook which I know not only to be scientifically erroneous but without interest or application to the modern world? How can I adopt a creed which, preferring the mud to the fish, exalts the boorish proletariat above the bourgeoisie and the intelligentsia, who with all their faults, are the quality of life and surely carry the seeds of all human achievement? Even if we need a religion, how can we find it in the turbid rubbish of the red bookshop? It is hard for an educated, decent, intelligent son of Western Europe to find his ideals here, unless he has first suffered some strange and horrid process of conversion which has changed all his values.”
― John Maynard Keynes
22 likes

“When he was left alone, when he had pulled out one stop after another (for the work required it), Stanley straightened himself on the seat, tightened the knot of the red necktie, and struck. The music soared around him, from the corner of his eye he caught the glitter of his wrist watch, and even as he read the music before him, and saw his thumb and last finger come down time after time with three black keys between them, wringing out fourths, the work he had copied coming over on the Conte di Brescia, wringing that chord of the devil’s interval from the full length of the thirty-foot bass pipes, he did not stop. The walls quivered, still he did not hesitate. Everything moved, and even falling, soared in atonement.

He was the only person caught in the collapse, and afterward, most of his work was recovered too, and it is still spoken of, when it is noted, with high regard, though seldom played.”
― William Gaddis, The Recognitions

“I just make the best book that I can and try to not worry about audience or if it will sell. The odds are against you, so why abuse your talent for the sake of a chimera? The only real pleasure for me in writing comes from pleasing myself. What readers think is interesting and illuminating (and it may even be correct), but that is nothing compared to the excitement of seeing a world develop. Besides, even though I like most individuals I meet, I have a pretty low opinion of people in general. So if I were to write for people in general, I would have to drastically lower my estimation of the intelligence of my reader. Rather than doing that, I write the way it seems the book has to appear. I don’t think that’s egotistic. There are often things I would like to include in my books—things about me personally and other materials—that I feel I have to leave out because they aren’t relevant to the book. I’m fairly ruthless along those lines, because I try to let nothing come in the way of what’s best for the book. If that means that the book won’t sell or that a publisher won’t buy it, then that’s my problem. I’ll suffer for that, but I won’t let the book suffer for it.”
― William T. Vollmann
tags: mccaffery-interview
43 likes

“What’s precious about somebody like Bill Vollmann is that, even though there’s a great deal of formal innovation in his fictions, it rarely seems to exist for just its own sake. It’s almost always deployed to make some point (Vollmann’s the most editorial young novelist going right now, and he’s great at using formal ingenuity to make the editorializing a component of his narrative instead of an interruption) or to create an effect that’s internal to the text. His narrator’s always weirdly effaced, the writing unself-conscious, despite all the "By-the-way-Dear-reader" intrusions. In a way it’s sad that Vollmann’s integrity is so remarkable. Its remarkability means it’s rare”
― David Foster Wallace
5 likes

Banned Books — 4527 members — last activity Feb 01, 2023 05:30PM
To celebrate our love of reading books that people see fit to ban throughout the world. We abhor censorship and promote freedom of speech.

Polls voted on by Jimmy