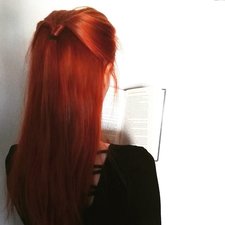 This will prevent Azriela from sending you messages, friend request or from viewing your profile. They will not be notified. Comments on discussion boards from them will be hidden by default.
Sign in to Goodreads to learn more about Azriela.

The Hyena and the Hawk (Echoes of the Fall, #3) by Adrian Tchaikovsky
1 highlight
Except she realized then that gods are all very well in stories, or off in that far country where priests and dreamers went. Gods standing before you stabbing at a five-year-old child with a spear were less palatable.
See Azriela’s 5 books with notes and highlights…

“What is there in our nature that is for ever urging us on towards pain and misery?”
― Mary Shelley, The Last Man
tags: human-nature, misery
16 likes

“They’d need no reason!” shouted Arbeely. “Why can’t you understand? Men need no reason to cause mischief, only an excuse!”
― Helene Wecker, The Golem and the Jinni
26 likes

“Cats are like witches. They don’t fight to kill, but to win. There is a difference. There’s no point in killing an opponent. That way, they won’t know they’ve lost, and to be a real winner you have to have an opponent who is beaten and knows it. There’s no triumph over a corpse, but a beaten opponent, who will remain beaten every day of the remainder of their sad and wretched life, is something to treasure.”
― Terry Pratchett, Witches Abroad
43 likes

“I suppose one finally learns, after much searching, that we really only belong to ourselves.”
― Colum McCann, Dancer
11 likes

"Suddenly he began to speak to the fish in their illuminated tanks. 'Now at least I can look at you in peace, I don't eat you anymore.' It was the time he turned strictly vegetarian.”
― Jonathan Safran Foer, Eating Animals
tags: animals, kafka, vegan, veganism, vegetarian, vegetarianism
1 likes

Best Books of the 19th Century

Polls voted on by Azriela