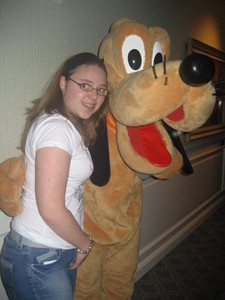 This will prevent Emma from sending you messages, friend request or from viewing your profile. They will not be notified. Comments on discussion boards from them will be hidden by default.
Sign in to Goodreads to learn more about Emma.

“Read what you find interesting, and then follow your interests. You'll find that in doing so you always generate enough to illuminate the next step.”
― Mark Helprin, Freddy and Fredericka
tags: books, reading, reading-books, reading-habits
4 likes

“And I knew then that there would be no telling me what he saw. I understand somehow that certain images, certain sounds, could not be shared and could not be lost.”
― Kate Morton, The House at Riverton
tags: ptsd, shell-shock, trauma
2 likes

“Walt famously said that it-- "it" being being the Disney empire--all started with a mouse, but the mouse was created because the rabbit was purloined.”
― Leslie Le Mon, The Disneyland Book of Secrets 2014 - Dca: One Local's Unauthorized, Rapturous and Indispensable Guide to the Happiest Place on Earth
tags: mickey-mouse, oswald, walt-disney, walt-disney-quotes
2 likes

“His (Walt Disney's) favorite song, 'Feed the Birds' from Mary Poppins. The lyrics give insight into Walt's benevolence--his belief that small kindnesses go a long way. Disney Legend and lyricist Robert Sherman once explained the sentiment: ' Doing just a little extra and going just a little bit out of your way to make someone feel special. Sometimes it makes all the difference in the world to a person.'

Come feed the little birds, show them you care
And you'll be glad if you do
Their young ones are hungry, their nest are so
bare
All it takes is tuppence from you....

When the song was finished, Walt would say under his breath, as an aside to himself, 'Yup, That's what it's all about.'
Robert overheard that whisper and concluded, 'I do think this song summed him up. He was a simple man---a simple, wonderful man who understood that the greatest gift life bestows upon a person is the chance to share with others.”
― Marcy Carriker Smothers, Eat Like Walt: Disney's Love of Food and Flavors

“To those who refuse to be blinded by the glare, or deafened by the hush, who are brave enough to question, and curious enough to explore. To those who will not forget. You will make a difference. And to the rest of us, so that we may learn how.”
― Zana Fraillon, The Bone Sparrow
9 likes

Books I Have Every Intention On Reading Someday

Polls voted on by Emma