Mod
Add America Ferrera to the long list of actresses who are supposedly up for a role in the Twilight sequel New Moon.

Following in the footsteps of Vanessa Hudgens and Dakota Fanning, the 24-year-old Ugly Betty actress has reportedly auditioned for the movie. Ferrera tried out for the part of Emily Young, fiancée to Sam Uley and second cousin to Leah Clearwater.

“I got to audition for New Moon today! For the role of Emily,” Crazy Days and Nights quotes the outspoken actress and snappy dresser as saying. “The casting director, you fans of the book will be glad to know, has read the books and loves them. And you can tell. His direction was spot on for the character. I loved the books. I would so love to be in the movie!!!”

Seems like a perfectly reasonable match. After all, Ferrera has had experience interacting with monstrous characters before.

She does! Emily rocks! YAY AMERICA!

Well ya... but she looks right.

I haven't seen any pics of her lately, so I wouldn't know :(

I think its gonna be on E News. 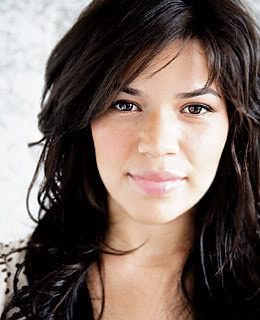 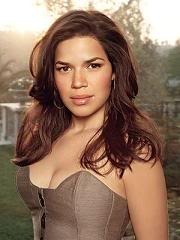 Mod
Seems like she has lost a lot of weight but I still just don't picture her as Emily....

sorry, but who is emily

Mod
Sam's girl...America is 25 and Emily is only supposed to be like 19...and she is supposed to be extremely beautiful....plus America is Honduran not Native American... oh well just my opinion...

I hope she gets the part!

she seems to be in her 20s, o well i dont care much.. new moon is my least favorite book except for the beginning and the end in italy : ) ahhhhhhhhh Great!~!!!!

that would be awesome if america got the part, shes really pretty.

Mod
She's a great actress so I'm sure that she would do a good job.

Hmm, I just can't imagine her as Emily... but I don't know. She might be a great Emily! :D

and america can pass for a quiloette (sp?)

Mod
heres something else...

America Young, who has had supporting roles in movies I’ve never heard of such as The Dead Undead, Point of Contact, and Ultimate Weapon, has auditioned for the role of Emily in New Moon, according to a post on the blog of (her?) entertainment lawyer–

Oh!!! And I got to audition for New Moon today! For the role of Emily. The casting director, you fans of the book will be glad to know, has read the books and loves them. And you can tell. His direction was spot on for the character. I loved the books. I would so love to be in the movie!!!

I’ve never heard of America Young, but if this picture is any indication, I think the part-Native American actress could be a good fit for Emily. What do you guys think?

neither of them are really what I had in mind... but... I donno... they might be able to make it work.

Mod
I know...I just expected her to be super beautiful even with the scars...

Stephanie wrote: "Heres that post with the pics Kay!!!"

Thanks, Stephanie! Clearly, you have all bases covered.