Does this mean he has to redo everything he did yesterday? Were we "presidentless" for a day? Was Biden in charge?

Oath-Gate: an intentional attempt to reduce all those high hopes to realistic proportions. I am fallible. See me stutter.

Obama messed up because the Justice screwed up... the Justice said "faithfully" in the wrong place, and his pacing was all off...so then Obama didn't know whether to repeat it as it was said, out of order, or to state it correctly...
you see, he's still infallible!

It was stated on the news that his presidency DID commence from the point he took the oath on Tuesday...

or at noon, as Gine state above.

Still, this was all pretty funny.

I think we're going to see a presidency with a sense of humour once again.

how wonderful! intelligence AND a sense of humor!
wow, is it too good to be true?
AND he smokes....
I like that.
:) 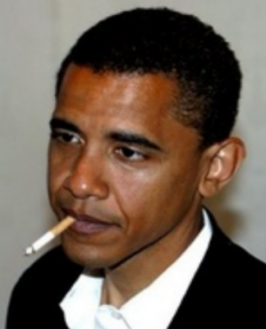 Wow...thanks, Gine. I had only glanced at the article this morning, I had no idea the oath was more ceremonial than offical. Interesting. The people complaining about the mistake need to get a life. Roberts and Obama are human, they're in front of millions of people, of course they might f--k up a little.

That reminds me...when I got married the priest accidentally called me "Sean" twice during the ceremony (Sean is my wife's brother's name, and the priest was a friend of the family) so every now and then I remind my wife that we may not be offically married because of the problem with the vows:)

What's he smoking in that second pic?? Looks a little shady...:)

Mod
Looks like he's enjoying it, whatever it is.

Sweeter and I wrote our own vows, too, and during mine the judge messed up a couple of times. It was like to keep the rhythm he'd set he was condensing words, rearranging. I just followed his lead, but said the vows as I'd written them.

The oath is in the constitution, though, written that way. That's why they wanted to make sure they got it done exactly right a second time. I think I remember reading that it happend to two other presidents, too.

yep. two others had to redo: Calvin Coolidge and someone else, even more forgettable.

These are the quotes from the Constitution:

Article II, Section I (regarding the President):

Before he enter on the Execution of his Office, he shall take the following Oath or Affirmation:

Coolidge and Chester A. Arthur had to redo not because of mistakes, I think, but because of a potential problem with witnesses present.

Chester A. Arthur IS even more forgettable, Chairy!!!

Good pub trivia fact: The oath of office is the only sentence in quotes in the Constitution.

Bonus: the "so help me God" is not actually in there. Some people protest its inclusion, using some cockamamie argument they call "separation of church and state".

And Chester A. Arthur helped standardize time zones, so we can't forget him. The man was a hero.

Time zones interest me. I have no idea how you people wait until ten PM for what we in the midwest think are the 9PM shows. You're up too late!

LMAO, I feel the same way, RA! It's bizarre!

Up too late, and then we're still the first to see the sunrise. It's just not fair. No wonder I'm tired.

Mod
I'm sure that scheduling hazoo made sense in the 1950s, but nowadays you'd think they could figure out some kind of technology for that.

Technology...like maybe something that can record the show so that you could play it back at a more convenient time...
if only we could invent a dictaphone for television.
We would be rich! Rich, I tell you.

back to my bottle of wine.

Mod
Well, Sarah 3.14, the problem is that the show comes on later than I want - so I need some kind of newfangled technology that will allow me to watch the shows here when they're watching it over there.