Mod
This topic would feature my creation, The Rain Show.

My show would consist of interviews or performances by random characters. And if you're lucky enough, I could put YOU in the show for an interview! ^-^

First up, is Prince Zuko of Avatar.

Why? Because I used Avatar in the Hater's Fiction. >.< and because I have the final episodes of Avatar in my computer... >.<

So here goes the first one.

Mod
P.S. You would have to save it in your computer to zoom in. ^-^

but for those who can't read it, even when it's zoomed in (I apologise) here's the script:

I'll start with the greeting since the rest of the script are too big.

Rain: Please give a warm welcome... to PRINCE ZUKO of the Fire Nation!

Hello and welcome, Prince Zuko! How are you, Your Majesty?

Zuko: I'm good thank you, and just call me Zuko. No need for the formalities *smiles*

Rain: Cool! Before we start the interview, we want to know what you feel about Twilight.

Rain: Yes. *cautious* Yes, I did. Because in this show, we believe-

Rain: *yelps and falls off chair in surprise* ow...

Zuko: GRR!! Just hearing it makes me wanna strangle someone!!

*next panel* Every single day, I get to listen to Sokka preaching how great and velvety Deadward is! Or how he can't wait for the f****** movie to come out!

YOU HAVE NO IDEA HOW MUCH SUFFERING I HAD TO GO THROUGH!

Rain: Ouch... your ears must have been bleeding...

*next panel* It does however, make great campfires...

*an arrow points at the bonfire saying Twilight books*

Zuko: In that case, let's talk. I have all day.

Mod
Thanks a bunch!!

Mod
I know that this isn't really a part of the show where I interview someone, but I think it would fit as an advertisement in between takes. >.<

This is the script. I'm sorry I should've posted a larger version of it. Sorry fellas!

Teacher: (Next panel) For today's lesson, I would show you a reenactment of Breaking Dawn, starring me and my wife.

Teacher: (Next panel) I know you ALL LOVE the Twilight series so you'll be excited to see this! *click*

Wife: Come my dark Adonis. Let us murmur our passion while you sparkle under the sun...

Teacher: Just a second honey, I need to be *very beautiful and CREAM myself... *reference to Robert Pattinson's comment of the description of Edward in his script.

Teacher: ... and that concludes my presentation for today.

Teacher: The Twilight church loved it! But what do you guys think? Pretty cool, huh?

Teacher: So who wants to watch it again?

Mod
you all have to save it before you could actually zoom in enough to see the dialogues.

Mod
lemme know what you all think.

why are you saying thank you??

Mod
Courtney wrote: "lol, It is really funny that you all call me Court because that is my nickname at home." 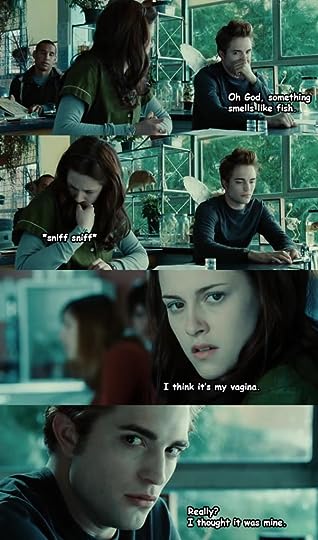 gross ewwwwwwwwwwwwww i cant even look at their faces they are so fricking UGLY!!

"
that is also really mean

If you like Twilight, what are you doing here? I cannot stress how much it irks me when people such as you don't think that there is anywhere they aren't allowed to go. You're not allowed to go here.

If you like Twilight, what are you doing here? I cannot stress how mu..."

If you like Twilight, what are you doing here? I canno..."

I don't ever recall us -or at least me - cussing at you. YOUR friend shouldn't be here. And YOU shouldn't be poking your nose into OUR business. TWILIGHT HATERS OBVIOUSLY DOESN'T MEAN YOU, SO, GO AWAY!

lets just stop fighting this getting really pathetic and pointless we all have our different opinions so lets just live that way okay??

Sure, okay. But, seriously, this is not where they belong. They can have their different opinions elsewhere.

i know right??? they seriously shouldnt be here

Rose wrote: "Well, you should know that like yours, our opinions are just as stubborn and no amount of defending can change it but most of us are just here for the socializing part that comes with this group. I..."

Celine wrote this
I don't ever recall us -or at least me - cussing at you. YOUR friend shouldn't be here. And YOU shouldn't be poking your nose into OUR business. TWILIGHT HATERS OBVIOUSLY DOESN'T MEAN YOU, SO, GO AWAY!

Rose wrote: "Well, at least you said you weren't a vampire. That's what most of the other Twi-Lovers would've said.
But you should know that most of us understand your opnions and respect them ad we don't mea..."

vampires are scary and totally unrealistic its so stupid

i don't think they r scary

Rose wrote: "I like Dracula better and Blade. Blade is SOOOO cool, he's got all the weapons and he kills the evil vampires but he's also a vampire but he can't give into the thirst or else he'll turn more anima..."

cause i just do

Erin wrote: "is that ur reason or r u just to stubborn to tell me"

Doesn't. Have. To. Esp. to someone who's as protective to the book as a maternal animal.

huh?
as protevtive to the book as an animal
r u insane?
who would get that protective over twi?

At least you have your Sketch Book. :(