I know this is a website devoted to books, but
I thought I would spread the word about an incredibly powerful documentary I saw here in Washington, DC. last night called “Lost Sparrow.”
It’s the story of four Crow children, two boys and two girls, who were taken away from their parents in the early 1970s a few years before the Indian Child Welfare Act of 1978 went into effect.
Their parents clearly had issues, and the children needed to be taken out of a dangerous situation. But the practice back then before the act was passed was to put Native American children up for adoption into white families without telling their biological parents where they were being sent.
The four children ended up with a family of six other children in Northern New Jersey -- The Billings.
A few years after the family moved to upstate New York in 1978, the two oldest boys decided to run away from home. The next day, they were killed when they were run over by a freight train.
The powerful part of this film is that it is written, directed and narrated by Chris Billing, one of the Billings biological sons. The death of his two adopted brothers had always haunted him.
I won’t be a spoiler, but his investigation led him into some very hard truths about his family.
It’s playing at the Slamdance Documentary Festival in Park City, Utah next week Friday, Jan. 16 at 12:30 p.m. at main screening room at the Treasure Mountain in and will be repeated there Tuesday, Jan. 20 at 3 p.m.
More information can be found at www.lostsparrowmovie.com
Stew Magnuson

Thank you, I will be looking in to this. My mother was a child taken from her people and put up for adoption to a white(Italian)family.

Han Maske,
My name is Joanna to ride on horseback.
My respected Great grandmother ,many winds in hair, was also one of many taken by a white fam. the Bailey's. She was to be the wife of one of their sons at the age of 13. They had only 1 child a daughter given a white mans name,Maria,but by her mother she was called speaks with crows. She also became the woman of a white man, my grandfather a pilgrim. together they had 7 children the oldest my father.
My father became the man of a white women after my grandfather had moved his fam. back to Europe, as he could not stand how the white man raped and killed many innocent peoples. This is where the heart ship of my grandmother began. She was not allowed to speak her language (Lakota) as my grandfather was to afraid she wouldn't be accepted in white mans community, so she for 6 years remained indoors. After having many grandchildren I was the one who was taught the Lakota way which I live by till this very day. Although I am the child of 2 wonderful people I saw a lot of pain in my fathers eyes but also many good things. One of them was Love,the others Respect and Honor. Why this long storie? My friend, the white man will never stop hunting us. It is all they know, destruction be it people,animals or Grandmother Earth. They are too ignorant coming to understand (among many other matters) that the children born from mixed blood will never end the search for whom they are or where they belong to, do I need to speak of the pain that comes with it? I in all honesty do not know, people here in the Netherlands see I differ from them, in the States the same thing. The only salvation for me is to speak to many of young, and tell them my storie and of my Brothers and Sisters. We American Indians be it a thin bloodline or completely American Indian will not be accepted by any Government or Institution of Human rights. So I do "feel" this Brother's despair. All my Heart and Spirit is able to tell him at this point is to never give up to Walk the Red Road! As it has been foretold A new Nation will arise and be called the Rainbow Warriors.
As for my name? I sit on that Horse and ride through life as a warrior of the good, protecting every child in Prayer and saving them to the best of my abilities as I am a woman and we give life so we must protect it! As we are now Entering a New Era one must hope for the better that the Great Mystery made all of us as One! Only it is hard to see non Indigenous people as such which is a result of their actions towards us and others alike us.Many of us have tried, it is however not easy for memories do not die in life.
Wakan Tanka nici un,
ake he

Joanna to ride on horseback

Please be careful when you post. You're statement that "the white man will never stop hunting us" is offensive to those of us who do not deserve to be lumped in a group. I did not live here during the time of the slaves, never owned one, family didn't either. Wasn't here when the white men came to America and were destructive to the native americans. I am not going to live my life paying the price for the ignorance of a prior generation.

Dear Joanna to ride on horseback,

I like your name. In the Lakota tradition, is the name given at birth or is some of it added when the personality of the child is well known? I imagine a Lakota mother might look at her baby and say, "She is strong and she has no fear. I'll call her 'Joanna to ride on horseback'." Or maybe I am wrong. Maybe the descriptive name comes later.

Why do I ask? I'm always interested to know how people get their names. I have met people who say the grandparents chose their child's name. Or sometimes the name comes in a dream.

I hope the practice of taking someone's child and putting them up for adoption is now illegal everywhere. What a crime!

Good point, Carol I second that emotion and hope it doesn't go unnoticed. It's good not to be expected to take the blame for past generations, however it does not excuse the lack of knowledge of the Native American view of history.

Netflix doesn't have anything called "LOST SPARROW".
Will anyone recommend any other films with Native American content to rent?

Mod
Carol wrote: "Please be careful when you post. You're statement that "the white man will never stop hunting us" is offensive to those of us who do not deserve to be lumped in a group. I did not live here durin..."

Carol, are you a dead person, or someone who lives outside the USA? Because if you are neither, get off your "not my fault" horse.

The Pine Ridge and Zuni reservations are the poorest counties in the NATION. Native Americans on reservations make an average of $4,500 per YEAR. The Sioux Nation by treaty owns the entire states of North and South Dakota. Think they will ever be given back? The government stole trillions of dollars in fund monies for Native Americans. NA children still routinely get removed from their homes and put in boarding schools.

So yes, you benefit every day from what white people did and DO, today. You live off a rape that continues today. So much for you not paying a price. Thanks, because you pay no price, Natives do. Daily. Because today's generation is no less ignorant than the last.

I firmly second that Molly. Well said. Unless and until American schools begin to teach American History in a truthful way instead of "cowboys and indians" this generation and future generations remain ignorant to the reality of Native Americans today. Native American Indian Reservations...the Reservation System as a whole...in reality is this: 3rd World Nations living in a 1st World country. Now say that to yourself again. We think of 3rd World countries as being African, or Haiti or Mexico.......NOT being a part of America. But there you have it. And this is TODAY'S reality. NOW.

This comment is not to provoke. Only to encourage. If our education system is failing to tell the truth to America's youth today about the GENOCIDE of the North American Indian...don't we owe it to our children to teach them ourselves? As a Blackfoot Sioux...that's all I ask. Tell the truth...and look at us NOW. Please don't act like we exist only in myths and stories.

There are many Americans who are educated and anything but xenophobic. Who is hunting Native Americans? Who is catching runaway slaves? Many Americans are not going along with the greed, abuse and violence program. It takes giving a hard look at ourselves and our government, unfortunately the last election shows that most are not willing to do that and it is extremely unfortunate that many republicans think they are good moderates when they're actually selfish teabaggers.

Tea Party? Working Class "Republicans"? I sometimes have a decidedly un-PC reaction. Set to music from 2:02 to 2:59 of
http://www.youtube.com/watch?v=VrERLe... 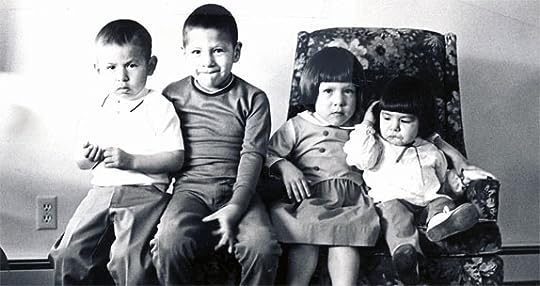 I was captivated by a film on central Michigan public TV at 4 am this morning. My ears perked up when I heard a man being interviewed refer to "LOST SPARROW." For any of you wanting to see it, it's a documentary that's part of the PBS INDEPENDENT LENS series. You can find out more here: http://www.pbs.org/independentlens/lo... Thank you very much, Stew for bringing it to our attention.

Monica wrote: "There are many Americans who are educated and anything but xenophobic. Who is hunting Native Americans? Who is catching runaway slaves? Many Americans are not going along with the greed, abuse and ..."

Of course you're correct, Monica. I was just saying that we can't expect to be trusted, just like that, and that we shouldn't let a little "lumping in" easily offend us.

I'm glad some readers here caught Lost Sparrow on TV. I didn't get an email from the director until the last minute or I would have posted something. Hopefully, it will be available on DVD soon. If I hear anything from him, I'll post it here.

Thanks, Stew. I would love to see it.