Note: This will be a very long profile. Be prepared to read for a long time.

Alias: Her official name is in a different language, so she uses her human name, Flame Scorcher.

Personality: Despite Flame's gaudy appearances, she's actually quite shy and quiet. She is not one to speak up to strong and stern people, due to the fear of being scolded or teased. She is very sensitive, but she cannot cry. Instead, mercury leaks from her eyes instead of water. It is very easy to offend Flame, making her an easy target for bullies and stuck ups. Although, Flame can have quite the temper. She does have a limit, and she will blow. Her rage can last for hours, and almost nothing can calm her down. When in rage, she is the exact opposite, and is definetly not the one to apologize. Flame can be very dangerous when she becomes enraged...

Well, Flame is naturaly calm, like the flame on a candle. She can be very blunt, and this makes people angry at her... Being this sweetheart, she appears to be opening up to you, but she acts the same towards almost everyone: "Sweet, understanding, and loving". But she only acts like this so people don't treat her awfully. Underneath the mask, she's actually quite timid. But when she wants to fight, she puts up one. She knows how to put people in their place, and isn't to shabby at breaking them with the simplest of words and phrases.

In short, Flame can be quite the decieving cat. 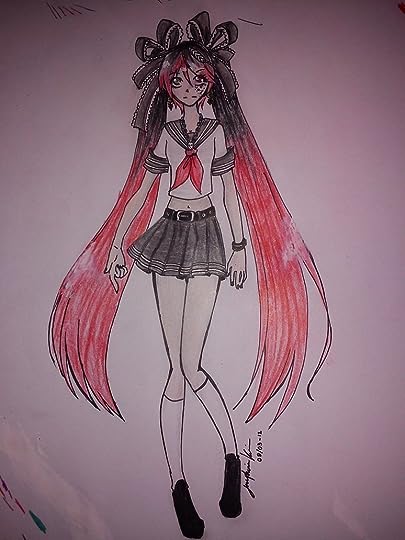 Restrained Appearance Details: Flame's hair is quite unique. Her hair is excellently thick, with smooth and soft texture (This is because of the harsh air and climate back at her home.). It is flowing and alluring, and she brushes it quite often. Apparently, even though it's thick, it is extremely light and is easy to braid and/or brush. Her hair colour starts out an ash black at her scalp. It stretches on for at least a foot or two (Her bangs are slightly tinged the beautiful ginger, though.), then fades to a tender, soft, ginger, flame colour. This colour dominates the rest of the hair, and becomes solid. At the end, her hair turns a solid, rich red, but it's just barely noticable. To top it all off, She likes to sport black ribbons in her hair, with white frills sticking out on the sides. These ribbons are fairly "fat", and she's rarely seen without them.

Her right eye is topaz yellow, one of the features she is teased for. It is comepletly normal, but when she reaches her unrestrained form, it turns into what looks like her right eye. Her right eye is a blood red, with black pieces of charcoal embedded into the skin surrounding her right eye. 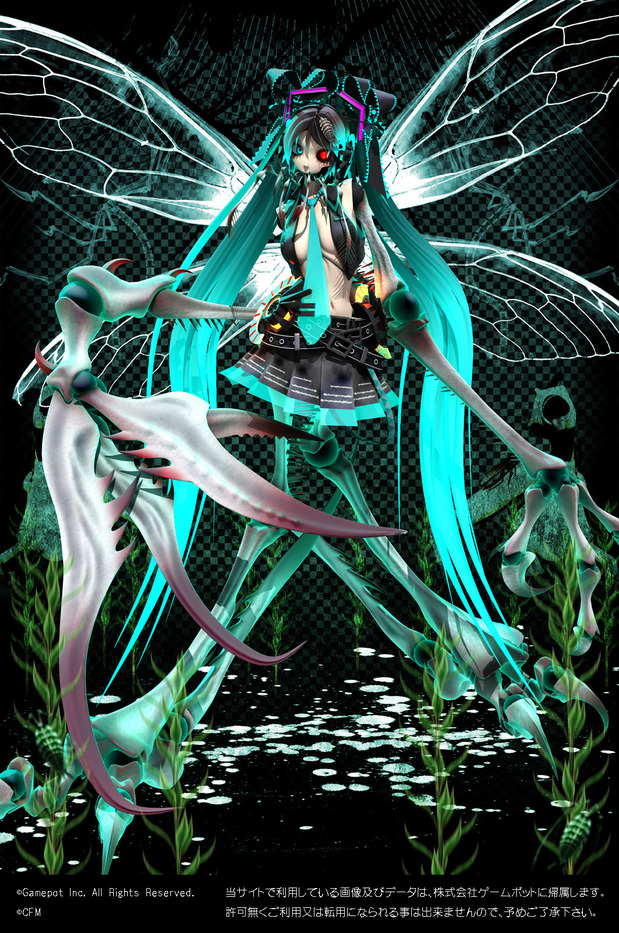 Except everything that is green is a bright orange.

Flame's unrestrained form is hideous. In other words, there's a reason she keeps her wings hidden under human flesh. But she finds her appearance normal, while others find it revolting. She obviously never let's anyone see this form, and almost no one even knows this form. However, this is not her full unrestrained form. Since the temperature, air density, and the sunlight is different than the ones on Venus, she cannot take full flight in this form. She still has a human and a human main body. However, her legs and arms reveal that she's not at all a human. The colour would make a human gag, but back on her planet, those with that 'skin' color are greatly respected. That was another reason why she wears a human mask at all times. She is not embarrassed, but pained by how much humans laugh at the sight of her.

Her red eye has become much more noticeable, with black blood vessels stretching out two inches from her eye. This makes it look like she's crying. Her hair also grows longer, but the color doesn't change. Where her lower jaw was, six insectious feelers poke out from the roof of her mouth. She no longer needs to eat as often, and now does not need oxygen for breath. If you look closely, her bug eye is now able to glow.

Flame now sports two bug arms. One is shaped like a talon, used for snatching and other things like that, with the other is shaped like a razor, built to shred and slice things apart. This one isn't used for grabbing, but strikes with extreme speed. No one has ever escaped this menacing claw, and she has killed every single one of her victims in this form.

Now, imagine both of those combined. Now you have her feet, which makes winning a fight against this alien impossible. Her feet are like talons, and can easily reap someone from the ground, then tear them apart still just using her feet. The razor part can flip into the opposite way it normally is on, making it a deadly foot blade. She kicks with stunning speed at her enemies, either striking them down or slicing them in two.

Three Reasons Why She Doesn't Fight in this Form:

1) She knows humans will laugh at her, and she's already had enough.
2) She's much more powerful than anyone else, and she does not want them to feel jealous, and/or attract attention to herself.
3) She wants to be as normal as a potted plant is against the rest of the greenery on Earth. 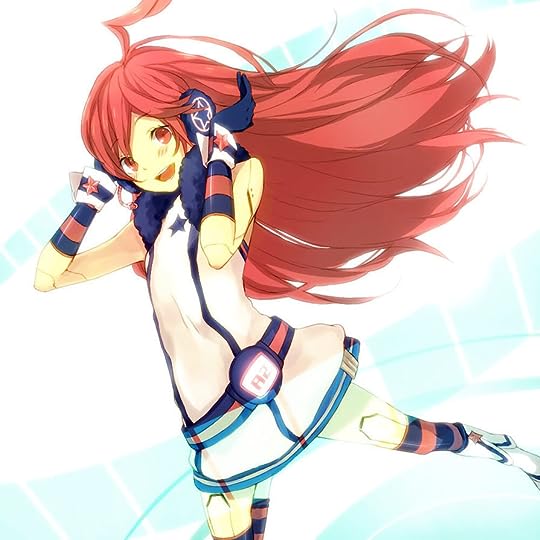 This is the most humanoid form of hers, even though her legs and arms have been reconstructed. This is actually a robotic suit (The Arms and Legs are artificial, they're robotic.) for her, and she tries to look as different as possible. She uses an extremely rare facial cream (Only found in Pyrax.), and applies it to her face. This causes her "bug eye" to fade, and become a normal human eye. The pieces of charcoal also disappear. The reason her arms and legs are artificial is because she actually has the legs and arms of her Un-Stimulated form. She can only display her full strength and power when she isn't held back, therefore she fits her bug arms and legs into special, mechanical casts for them to "dissappear." Then, she fits into the rest of her armour. Her armour is made of a rare material that Pyraxan lyre worms weave. The material reflects cold air, and traps hot air in. This material is also very flammable, so Flame can just clap her hands and produce fire or sparks.

Yes, she has taken her ribbons out.
(hide spoiler)]

Birth Planet: What humans call Venus. She considers this offensive, because they dared to name it after a fake Goddess.

The real name of Venus would be Pyrax. Therefore, she is a Pyraxian, or what humans call a Venanian.

Superpower: Flame can control any type of fire, you name it. Of course, she is unaffected by the pain humans experience caused by fire. In fact, she sleeps inside the flames. She feels the warmth of fire, and their voices. She can actually speak to the flames, but this makes people tink she's insane. Earthly fire is much less violent, so she claims she's weaker, and that she can display more power than that.

Being from Pyrax, Flame is much, much stronger than the average human. This is due to the fact gravity is much stronger on Venus. She is not as strong as Superman, but is stronger than Superboy himslf. She can control her strength, so that way, she won't knock you to the ground when she taps you on the shoulder.

Flame can become fire itself. It's quite powerful, but she might go wild, and destroy everything in her path. She does this because she cannot control it; it's in her blood. But she doesn't do it to DESTROY, she does it to cleanse the land. This happens very rarely, because she can just barely control this ability.

Flame has the ability to speak too any type of insect. Her vocal chords are shaped for adapting to animal/insect/arachnid/etc. languages (But because of this, she speaks very, very quietly so people do not notice her thick Pyraxian accent.). Her red eye also allows her to have "bug vision". She can see through walls, and see with greater detail and color with that eye. Her eye is designed to see well in the night, but works like a human's eye during the day. Her unrestrained eyes are useless if she is plunged in water, however. Her senses are also unlike a humans, because now her vision has greater detail, and her hearing is much more advanced than a normal human's. She can also hold her breath for about an hour and fourty five minutes, but she rarley does.

Bio: Flame has quite the history...

Flame is quite new to Earth. She has only been on Earth for no more than two years. She has mastered many languages, and has enjoyed learning about all the different cultures.

But the first year she visited Earth, she was not the friendly alien she is now.

She destroyed everything in her opath, shredding everything in sight. (Yes, she was in her unrestrained form when she did this.) She was in full blown rage, but no one knows why. The whole Justice league and the younger heroes had to team up to take her down. They knocked her out, then injected a special vaccine, causing her to calm down and deflate into her, "Restrained Form". She is still adjusting to human life, and the others are slowly coaxing her into it as well.

Family: None. Well, of course she has a mother and father, whihch are both pure Pyraxian, but they live back on Pyrax.

Crush: Nobody. She feels no one would understand her, and she feels that no one would be able to accpet her true form.

Weakness: Flame has multiple weaknesses. Her most obvious weakness? Anything cold. She cannot be in any tempatre BELLOW 55 degrees farehiet. She also must and will stay away from water. Unlike normal life forms, she does not require water to stay alive. Instead, her body requires magma to live. But she does NOT need it as frequent as humans need water. She can survive year without magma, but usually only visits a volcano once a year (As in Venus years.) to drink magma out of the volcano. She only visits shield volcanos for this action, but occasionaly will visit other types at a treat. Smoke an ash is not a delacacy, but a mere snack or treat for Pyraxians. If she does not get her yearly fill of magma, she hybernates for about twelve months. If this repeats itself three times in a row, she merely dies.

Um, not to pry, but why have you posted your character here...? This is where I put my characters...