Link to print your own copy: BINGO card 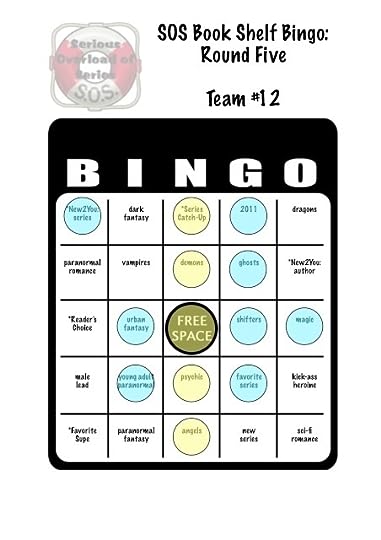 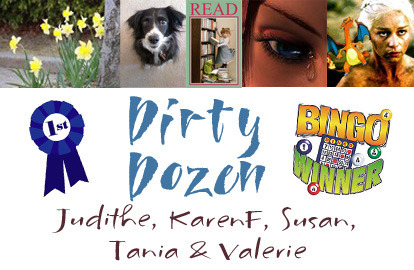 YIPPEE!! I've never played before, but I'm excited to start this.

I'll be driving today from north Alabama to Louisiana, so I won't be able to check back in until later this evening or tonight. I'm looking forward to meeting ya'll :)

Hi all! Thrilled to be playing with you!

This is my 5th round of Bingo (quite addictive! And been doing Banish Bingo Blues challenge to tide my over to BSB R5!) Ummm...what else to say? I'm a mod here at SOS, so you'll see me poking my nose in all over the place (well, I'd probably do that anyway 'cause I love it around here). I'm located in Japan, addicted to reading...and that's the end of my ramble!

Yay, Susan! I'm so glad you decided to join us. I know you'll have a great time. Safe travels on your road trip!

Hey, everyone! :D This is my second time playing - so excited! :)

Friendly first assignment as we pace through the shelf-announcement wait~we need to select a captain and come up with a name! Any ideas?

*The Dirty Dozen (Yeah, yeah...I know...spouse channel surfed by it(well, with a bit of a finger break at that one) today?yesterday?~far too recently)
*Doozy/Dazzling/Dazed/Dancing Dozen (pick an adjective starting with "d")

BRB...hopefully! Darling daughter decided to make some fries...first time frying things so I've got to go supervise. If I don't make it back, call the fire department!

Other 12 related things...
(Courtesy of Wikipedia)

#The atomic number of magnesium in the periodic table.

# Force 12 on the Beaufort wind force scale corresponds to the maximum wind speed of a hurricane. Since my residence-country has entered typhoon season, as well as rainy season, I like the possibilities of this...

#The 12th moon of Jupiter is Lysithea.

#Twelve Days of Christmas
#Twelve Labors of Hercules
#Most calendar systems have twelve months in a year.
#The Western zodiac has twelve signs, as does the Chinese zodiac.
#The Chinese use a 12 year cycle for time-reckoning called Earthly Branches.

Twelfth Night is a comedy by William Shakespeare
Twelve Angry Men, by Reginald Rose
#King Arthur's round table had 12 knights plus King Arthur himself.

Hmmm... I like the possibilities of Force 12, too. Lots of good choices to think about!

Hi ladies! Thanks for the safe travel wishes. We're at a mid-trip bathroom break. Is been safe, and sane, so far. I've got 4 of my children with me and my 2 grandchildren....so I may not be sane when this is over. Either that, or I'll come home with one less child (and I already know which one I'll get rid of LOL)

I'll check in again at either the next bathroom break or when I get there :)

LOL! Susan, hope you (and that one "child", especially!) survive!

Can't wait to get started. Half way through my current book, so trying to cram before Sunday!
Hope everyone has a great night, safe travels and looking forward to working with everyone...

Your work is awesome. I love the dirty dozen.

Susan (susayq) wrote: "Hi ladies! Thanks for the safe travel wishes. We're at a mid-trip bathroom break. Is been safe, and sane, so far. I've got 4 of my children with me and my 2 grandchildren....so I may not be sane wh..."

I made it here! Everyone in the car is still alive...for the moment ;) now I'm thinking my mom's 3 dogs may not make it LOL

LOL...maybe we should try and incorporate something with "-icide" in it for our name...my spouse frequently skates along that line as well...

Hmmm...we're still waiting for Karen F. to check in...

Also...who wants to be captain? I can, but am verrryyyyy happy to let someone else have the honor as well!

I wouldn't mind being captain, but we'll see what Karen F. says when she checks in. :) I have a ton of books on deck, but don't want to start any until the first shelf's announced, haha.

Yay!!! (And whew!) Thanks for your offer, Valerie!

I sent a PM to Karen F., and hopefully she's survived her week, and happily heading into the weekend and free time!

Also, I'm getting shelf-antsy so decided to get my Free Space read decided.

Here's a link to the Free Space Rules for anyone else who wants to do something (and there's probably a party going on in the discussion thread now, or soon) until the first shelf announcement.

(It keeps giving me a "page does not exist" when I try to add the discussion for Free Space Rules ~located in the Team Challenge Folder~ into the link. So, that link goes to the memo Steph posted on the discussion thread for BSB R5)

Sorry I'm a bit late checking in. I'm on vacation this upcoming week (yay!) but that meant yesterday was crazy at work with trying to wrap everything up and then there was awful Friday night traffic. So I just kind of fell on the couch when I got home.

But don't fear, that's not typical for me. This is my fourth time playing I think. Last round it came down to the wire and my team was hours away from winning. It was so much fun and as always I both whittled down Mt. TBR and ended up adding to it.

Let's see, I'm on board with The Dirty Dozen (hee) and with Valerie being captain.

I'm off to go figure out my Free Space read in advance and am anxiously waiting the first shelf announcement!

Howdy, Karen!! Hooray for surviving to vacation! Hope it's a very good one for you!

Thanks Judithe! It's my favorite kind of vacation, no big plans, just a couple of day trips, puttering with the container gardens on my deck and, of course, enjoying the late spring/early summer weather sitting outside reading. :)

Morning! I'm fine with Valerie being captain. Thanks for offering :)

I've got my free space read picked out already LOL

Hi Karen, hoping you have a wonderful vacation!

Thanks for captaining Valerie, that's awesome.

Forgot to mention, this is my fourth round of bingo and I enjoy it so much. (It also forces my family to support more reading;))

Hope everyone has a wonderful Saturday and can't wait for our first shelf notice!

WE HAVE A SHELF: young adult paranormal.

I'll let you know which I decide on later this evening :)

Good morning! After days of rain, it's lovely to wake up to sunshine, and a shelf!

For Free Space, I'm still debating, but one of these from SOS' bookshelves:

I also just posted this over in discussions:

The "official" SOS Book Shelf Bingo ROUND FIVE Stats Google Doc is up. Tab 1 shows which teams have received which stamps. Tab 2 has ALL teams Bingo cards...for an easy overview of who has what.

Valerie, I made the request for Team Captains to verify, but went ahead and confirmed ours to give an example...hoping everyone else will also do so quickly!

Judithe, is says 'This URL cannot be found'.

I went and posted a couple of others...fingers crossed!

Oh and for the free read I'm going to read on of these (all from the SOS bookshelf):

So with you! LOL...guess we can say we get the hardest over first...though I'm still a bit worried about "male-lead"...

Just on my way to in-laws for fathers day. Will pick my books tonight. I'm hoping to read Morgan Rice's new book. Just came out on Friday, so with my luck won't be on the list, will use it for free space if I can't use it for this weeks shelf.

Have a great Fathers Day!

Tania....you changed your picture! It is you, after all! Looking at names, I was thinking "This is my former teamie, Tania." Then the pic was different...Sometimes I just a bit slow...! Yippee!

After an almost exactly 7 month gap, I finally got to #3 of Wicked Lovely. I've forgotten a bit more than I'd like, which was confusing at times, but still enjoyed the story quite a bit. Despite my aversion to YA in general (another weird thing, because I do enjoy most of the books of that genre that I finally do pick up), this is a series I enjoy.

In some ways, I have the same issue with this as I do with many of my reads in "modern" Japanese fiction. It's a "substance" thing, and I'm not sure how to define it. If I take it to a food metaphor, it's like eating one piece of toro sashimi vs a hearty meal of Japanese-style BBQ (or yakiniku). This is sashimi. It has a delicate flavor. It's light, without being overfilling. You want to enjoy more when you're done, but it's not usually an overpowering thing. (Side note, I live in Japan, and have for a long time. There is an incredible food culture, and an extremely strong underlying emotional expression through food. I think I could write a dissertation on that alone, so be forgiving of that foodie comparison!)

This tale moves the main focus back to Aislinn. She is the Summer Queen, and that has complicated her life in ways she is still trying to sort out. Keenan wants her to be "only" his, as does Seth. Aislinn has her true love, and doesn't want to give him up, but also wants her court to be happy and healthy. The other courts are vying for power and trying to work out their relationships with each other and their courts after the recent changes in three of the monarchies. Lots of angst and woe? Yep. But, it isn't the "drag-me-into-despair-make-me-want-to-slit-my-wrists" type. (Though, still recommend this angsty stuff be consumed in small doses). All the characters have minds of their own, and fairly strong wills. They are (generally) not blind to the faults in others, but want the best (generally) for their own courts, and will do whatever they must to get it.

There isn't a whole lot of dramatic action, but the series seems to be moving towards a dramatic climax. I'm intrigued to find out how it will all end, even though I'm not always so fond of some of the characters.

OK. End of book, end of review. Get back to reading yours!

Ahh, I'm glad to hear that you enjoyed that one! I did, too. I need to sit down and re-read the series one of these days. :)

LOL...I need to sit down and re-read the first two! Missed a few too many things!

One of my daughters has all the books in that series. Glad to know you enjoy them. I may have to pick them up.