I'm looking for a book I read in the early 90s, which I think can't have been older than 5 years at the time.

It's set in the US in a marshy/swampy region which I remember being somewhere on the East Coast (my American geography is terrible, so sorry if that doesn't make sense). There was a boy whose name was Kip or Kipper and who lived with his parents in a house on or near the water. I think they had a boat which his father might have used for work.

One day the boy heard a bird calling on the water and his mother told him the bird was called a "loon". At this point the story may have taken a slightly supernatural/dreamy turn, but sadly I can't remember anything more.

I think the cover was bluish - maybe a picture of the marsh?

Isle of the shapeshifters by Otto Coontz might be your book:

Mod
I don't know, but this cover might fit: 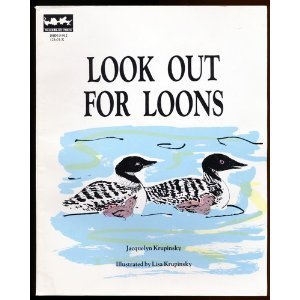 Look out for loons

I was thinking it was Look out For Loons too.

Dmdutcher, that's it! Thank you!

At first I though it couldn't be because I don't remember a girl character and that definitely isn't the same cover, but "shapeshifter" rang a bell and then I found this link.

I realise now that this was the first time I came across the word "shapesifter" and that's part of why this book intrigued me so much. I'm surprised I didn't remember that!

You're welcome, glad to help.