This topic is about Redwall
33 views
Redwall RP > Redwall Abbey

For all of you Redwall lovers, here is the Abbey!!

Redwall Abbey was built following the destruction and flooding of Kotir, an ageless castle in Mossflower Woods ruled by Tsarmina Greeneyes.
The survivors of the Loamhedge Abbey plague came to Mossflower country, led by Abbess Germaine to start anew. She designed the blueprints.

Along with the woodlanders of Mossflower and other Loamhedge survivors, the Abbey was built out of red sandstone from a neighboring quarry, with the intentions for the building to be a place of peace for all.

A tapestry was woven in the Great Hall dedicated to Martin the Warrior. After his death, he was entombed beneath the Abbey.

While it is ordained to be a peaceful location, many times a warrior is called upon from the residents to combat a threat against this peace.

The residents of Redwall name the Seasons every year after some large occurrence. Young citizens of the Abbey are called Dibbuns.

The Redwall Abbey Charter is as follows:
To be brothers and sisters of peace and goodwill while living together under the protection of Redwall Abbey.
Forsake all unnecessary forms of violence, not only to Mossflower, its trees, grasses, flowers and insects, but to all living creatures.
Help and comfort the dispossessed.
Harbour orphans and waifs.
Offer shelter to all creatures alike.
Give clothing, warmth and food to any beast or creature that is deemed in need of such.
Educate and learn, particularly in the healing arts, comfort the sick, nurse the injured and help the wounded.
Take food from the earth and replenish the land by caring for it; husbanding crops, living in harmony with the seasons always.
To honor and protect friends and brethren, only raising paw to do battle when life at Redwall is threatened by treachery and the shadow of war; at these times every Redwall creature should show courage, fortitude and obedience to the Father Abbot. The taking of another life must always be justified and never carried out in a wanton manner. 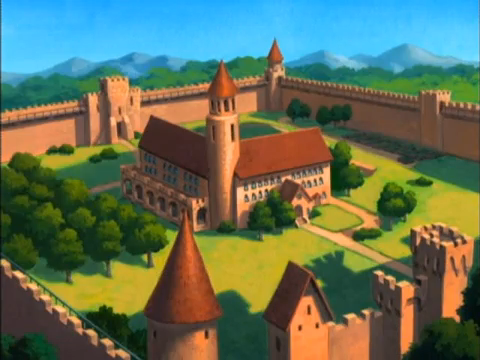 Streamwyte, Skipper of Otters, broke the surface of the Abbey Pond where he was taking his morning swim. He spotted the queen of the sparrows flying above the Abbey, and he waved. "Mornin', Sparra!" he called gruffly.

Bluebeak Sparra flew down to greet the otter. She landed with a graceful swoosh. "Morning, Steamwyte otter friend. Alla well?"

Streamwyte jumped out of the pond and shook himself off roughly. "Th' Abbey's quiet, I was just about to take a stroll 'round the walltops and check that everything be secure." The big tough otter held out a paw to the Sparra Queen. "Would ye like to come along?" he asked.

Skipper nodded silently and padded over to the wallsteps. He mounted the steps and and started around the south wall, alternating between watching the Abbey and the woodlands.

message 8: by [deleted user] (new)
Sep 11, 2012 07:44PM
Clover limped down the dusty road, a strip of her cloak around her arm, waist and leg, all of which was soaked in her blood. She glanced behind her to see if she was being followed. She spotted Redwall ahead of her and called out "hello? is anyone up there?"

Skipper heard a shout from the path and leaned over the battlements, immediately spotting the source of the voice, a ragged looking...he wasn't quite sure what it was. "State your business," he called. "Be ye a friend o' Redwall?"

Skipper bounded down the steps, calling back over his shoulder, "Bluebeak! Go and wake the Abbess, Sister Saronia, and Andrahm(Abbey Warrior), and tell them that there is a wounded stranger that needs help. Quick!" He quickly unbarred the small east gate and flung it open, dashing out to the dusty path. He reached the stranger in a matter of seconds, and picked her up easily in his brawny arms. With a flick of his tattooed rudder, he carried the dusty, bloody bundle inside the safety of the Abbey walls.

reply | flag
message 12: by [deleted user] (new)
Sep 11, 2012 09:43PM
Clovers hand was closed tightly around a beautifully carved dark blue bow. She managed to murmur only one word before sinking into the welcoming folds of unconsciousness "Pirates"

reply | flag
message 13: by [deleted user] (new)
Sep 12, 2012 08:13AM
Queen Bluebeak, a little baffled by another creature giving her orders, flew as fast as she could into the Abbey. "Where Abbess? Sister Saronia? Andrahm? Wounded creature! Need help quick!"

((The Abbess would be in bed, Sister Saronia s the Infirmary Keeper so would be in the Infirmary, and Andrahm is the Abbey Warrior so maybe in the kitchens getting an early breakfast? Can you guys make one of them? I'll make Saronia if you two will make the others...))

((Awesome, thanks Sakura! So Alexis, could you make the Abbess? Or Abbot if you'd rather...))

Skipper met Andrahm at the main door to the Abbey. He nodded to the bedraggled creature in his muscled arms. "She was out on the path, calling for help," he told the Abbey Warrior. "She said something about pirates before she lost consciousness. I figgered I'd better bring her in, and let you and the Abbess decide."

Saronia heard the Sparra Queen's panicked cries, and quickly grabbed a small satchel of herbs, ointments, and bandages. She raced out of the Infirmary, her long legs pumping, and dashed into the Great Hall, where she saw Skipper holding a muddy, bloodstained bundle as he conversed with Andrahm. She made her way over to the pair. "I say, would that be the jolly old wounded creature that I heard Bluebeak Sparra squawking about, Skipper me lad, wot?" she asked.

Gordo the Dibbun mole had woken up from a food-filled dream to the sounds of Sparra. He had sat up, tiredly rubbing the sleep from his eyes, and looked around. His button nose wrinkled with joy as he saw that he was the only one awake, and immediately decided to sneak out and find the source of all the commotion. He slid out of bed and trundled down the stairs. He peeked around the corner into Great Hall, and saw several creatures huddled together. He decided to watch.

Andrahm nodded and said "Smart choice. Lets let Saronia take care of her. I want to take a look around the battlements."

Skipper laid the creature on a rug. "You'll be all right by yer lonesome, Sister?" he asked.
Saronia dug through her bag. "Let's see, witch hazel and geranium for bleeding, chamomile and thyme for infection-" she looked up at Skipper as he asked a question. "Of course!"

Skipper looked up. "Abbess, marm," he greeted politely. "That there creetur was outside on the path. She asked to come in and said somethin' 'bout pirates afore 'er mains'l went down and she was out like a light. I figgered that I'd better bring her in quicklike and let the Sister get her all tidy and shipshape so she can tell us 'er business."

reply | flag
message 25: by [deleted user] (new)
Sep 19, 2012 06:42PM
Andrahm nodded and said "Please let me know when she wakes up, Sister. I would like to be there when you talk to her." he walked off towards the battlements.

Saronia nodded as she busily went about cleaning and bandaging the creature's wounds and applying restoratives. "Of course, old lad," she called out after him.
Skipper gave a salute with his rudder as he hastened after Andrahm.

reply | flag
message 27: by [deleted user] (new)
Sep 20, 2012 07:19PM
Andrahm climbed up the stairs and looked out over the battlements, staring down the path that she had come down.

At the dunes at the edge of Mossflower wood, Captain Razorwind was standing silently fuming. His ship was wrecked and his prize slave was missing.

Skipper appeared beside him and gazed down the path. "What do ye think, Andrahm?" he asked in a low voice. "Shall we post a guard?"

reply | flag
message 30: by [deleted user] (new)
Sep 25, 2012 07:13PM
Clover came to slowly and looked around, eyes widening in alarm when she didnt recognize her surroundings.

((Song is still in Great Hall with Saronia. Skipper and Andrahm are on the wall...))

Saronia smiled cheerily. "I say, waking up are you, wot? Good show. My name's Saronia, Infirmary Sister doncha know, and you m'dear, are in Redwall Abbey."

The Sister frowned. "What's that? 'Fraid I don't know what a 'llawder' is, c'n you explain, wot?" She helped the creature into a sitting position, and held a beaker of water to her lips.

"What language is that?" Saronia asked. "We may have someone here who can speak it. And yes, you couldn't have come to a better, 'scuse me, a more good place than jolly old Redwall-I mean, Llawder!" The jolly Sister smiled cheerily.

Clover smiled, relieved that she was in a good place, then frowned and said "My language....from remote....dnalsi...I...afraid....umm...."Clover paused, looking thoughtful as she tried to figure out what to say in Woodlander.

Saronia had a quick, clever mind. "I do believe that I can understand you, wot? You said that your language is from a remote island? Can you understand Woodlander all right, but just can't ,uh, lessee, kaeps it very well?"

((heck yes! XD))
"Ylloj doog wohs, tow?!" the jolly Sister commented. "Now, I'd better get the Abbess and Andrahm in here, to talk to you. I'm guessing that they'll want some questions answered."

Andrahm stared out over the abbey walls, his face impassive.

Captain Razorwind slayed the unlucky stoat whose job it was to keep an eye on his prized slave and said "Alright! we move out at dawn to track down Clover!"

Saronia smiled gently. "Fo esrouc, raed'm. That's what I do." She stood up. "Now if you'll excuse me a moment, I'll just toddle off and fetch some creatures."

Clover nodded and busied herself checking over her bow and arrows to make sure they were alright.

Saronia climbed the wallstairs and called out, "I say, Skipper, Andrahm, the creature has woken up. She speaks little Woodlander, but I can understand her and translate if you'd like to ask her some questions. Just thought you'd like to know, wot?"

Streamwyte nodded in agreement. "How is she?" he asked.

Saronia smiled. "Oh, she's made of stern stuff, that one. She's doing well, and will be completely fine shortly."

reply | flag
message 48: by [deleted user] (new)
Oct 04, 2012 01:17PM
Andrahm nodded "That is good to hear. I was worried that she might have been too badly injured. Its rare to see one so young be attacked like this." he said, then turned to Streamwyte. "Streamwyte. Do you think you could round up some otters to do a sort of guard on the walltops? see if you can find some Guosim too."

Skipper threw Andrahm a salute with his rudder-like tail. "Aye, aye, Andrahm, I'll commandeer some vittles from the galley, and then head out into Mossflower." He turned and swiftly made his way down the steps.