I am so excited about this book coming out June 12th(tmrw)! I will be waiting in line at Walmart to get my hands on this book.

Who else is stoked about this series? And what/who are you excited to see happen in this book? I'm excited to about Dimitri! I <3 Him!

Oh and I'm going to a Richelle Mead book signing and wanted to know if you guys had any questions that you would like me to ask her and I can report back to you guys :)

OMG it's out tomorrow! I'm excited for Dimitri too! Also excited for what i'm hoping is a romance between Sydney and Adrian. ok now i'm off to request it from the library! Questions (preditions): is Sydneys experiments with magic something more then just playing around? In other words are there witches in this series in addition to vampires? Where did the idea for Dhampirs come from? Will Jill's character get more developed as the story goes on?

AAAAAh I just finished it literally an hour ago and I am going to her signing TONIGHT and I am so stoked!!!!

Wow! Tell me how it goes and see if you can get some spoilers out of her! Take pics and share with us!

Well as usual I did not arrive early enough. Hanging out in the way back, so any pictures I get will probably be awful, haha. I'll try to get the good question/answers she addresses!

So I'm back from the signing! Like I said, I was in the way back so my pics aren't great. While waiting in line I got distracted and excited and forgot to take pics. But I did get ones of her and I. Anyways, she read from The Golden Lily, and then had a Q&A session. You can find several of the answers on her blog, and also through her twitter account. Someone who may be her agent-not sure-live tweeted the signing and all the questions. Anyways.
-She was asked who the hardest and easiest characters were to write. Hardest was Bad!Dimitri, easiest was Georgina from the succubus series, because she and Richelle have the same sense of humor.
-She was asked which character from the succubus series she'd miss the most (last book came out last August), she said of course Georgina since she's the narrator of the series, but also Carter. (Who I LOVE) In her words, "There's just something about a hard-drinking angel". Also, she mentioned that people have said that they would totally read a spinoff about Carter and Jerome. (I would TOTALLY read that)
-I couldn't really hear the actual question that was asked, but she said that at this time she is unable to answer whether or not shadow-kissed people can become Strigoi. She was quick to say that this does NOT mean "oh, she can't answer, Rose is going to become a Strigoi!!11!1!". It was more of a, "hey, this might become important later". (Which I took to mean as it could be something the characters discuss/find out, or maybe a Strigoi will try to turn Rose or Jill, and they'll find out then)
-She alluded to Bloodlines being planned for 6 books
-She had a really funny thing about "Zombie Rose", which I saw on twitter or something and was really confused about. Basically, what it meant was that she felt like people love Rose (and Dimitri) so much, that if she gave as much closure as she could and killed Rose off, people would ask when she was going to write about Zombie Rose. I laughed so hard.
-She was asked about her new adult series, Age of X. While trying to describe its genre, she said that while pitching the series, her agent described it to her editor as "X-Files in a Blade Runner world". Not that the X in Age of X has anything to do with X-Files.
-She was asked about the endings to her series, and if she'd like to revisit them. Obviously she's doing just that with Bloodlines for VA, but she said that she purposely left herself a few semi-loose ends in the Georgina series so if she (and her agent/editor/publishing co/whatever) ever decide to go back there, there's somewhere to go. She also addressed the issue of the end of Shadow Heir (Dark Swan #4) that a lot of people have...very strong opinions on. She said that she was rushed with wrapping up the series (I'd heard it was supposed to be 5 books originally) and left a bit more of an open end. She said that down the road, she'd love to revisit Eugenie's world, if not in a book than a novella. (Which I know, MANY fans would appreciate)
That's all that I was able to jot down, and I don't remember complete ideas of other questions that were asked. There were some questions about her writing process, and oh! I do remember the first question that was asked. She was asked why she chose to use Kentucky as part of the setting for Last Sacrifice. She said that it was actually because she'd come here before (I think it was shortly after Blood Promise came out). She said she'd never seen anywhere as green, other than Ireland. (We do like our bluegrass around here!) Anyways, that about wraps up all the stuff from the Q&A that I remember. If you have the chance to go to one of her signings (or ANY author signing of books you like), you totally should because they're awesome. For only like an hour or two, you get to see the people that create these awesome worlds and still get the sense that they're normal, regular people. Richelle talked about missing her baby while on tour and having to slow down writing schedules to spend quality time with her son. And also about 80's T-shirts. ;) Anyways, if you can stand the waiting in line for books to be signed part (bring a friend, or a book!), they're awesome and fun!

Totally COOL!!!! I'M So excited to go on tuesday! Did you bring any extra books to be signed?

Hey! I just got back early this morning from HOUSTON for the signing, and it was an AMAZING experience! I have some pics that I will post and alot of yummy info on the series and her other series but that will probly be posted on my blog later!

I'm gonna die!! can't believe that you get to go to a signing with Richelle and I'm stuck here in Portugal, where nothing ever happens...

This is the poster I made and she signed it and I also made one for her :) 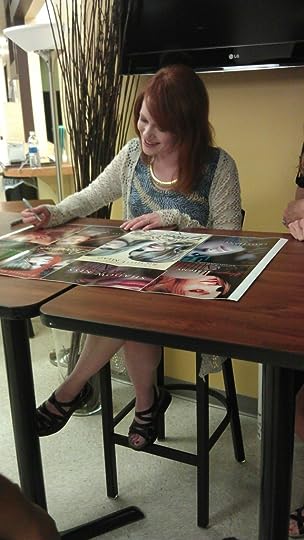 Everything I got signed! 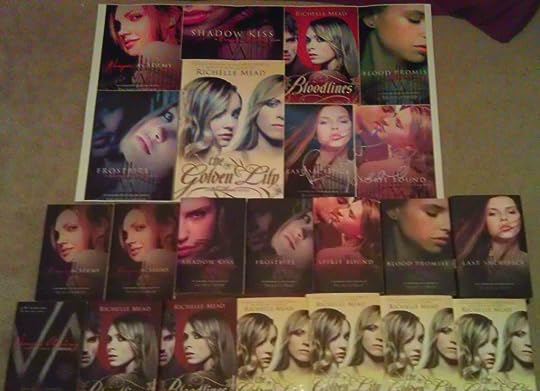 Mod
I can't believe we got her to sign all those books! I say we're a good team lol. It was pretty fun and I'm glad you made me read most of the books! She was pretty amazing :D

i'm so jealous! i wish i could get her autograph!! :^D

OH I forgot to mention that about a week or two after the signing, my BFF and I went to B&N and found a BUNCH of Richelle's books that she'd signed! There was a green sticker on the front that said "Autographed Copy". It was a little odd because she actually came to a different bookstore in town, but my BFF wasn't able to come to the signing so I was super excited that she got to get a signed book anyways. If she came to your city, check your bookstores! The only bummer thing about it was that we couldn't find any signed books from the Georgina series, but every other series had at least 1 signed book.

That's pretty cool! They usually do those things when an author comes to visit, the store gives them a crap load of books to sign and it's awesome because the people who happened to miss her get to go by the bookstore and pick up an autographed copy and I LOVE IT!!!! I would of stacked up on all of them lol

i am so jealous since we have no book store in the monterey bay area we i don't get to go to book signing .. I am so glad you got a the georgina series it was a wonderful series i have them all!!

thats so cool, i should have checked if she was going to be here so i could go see her... i got to see Jim Butcher a couple of yrs ago and even though they were sold out and i didnt get a book signed it was fun to be there and here him answer questions about his series The Dresden Files, wich next to VA is one of my favorites.