90 views
Writers > Anyone Have a Giveaway? Post it here!

Mod
If any of your are authors and have a giveaway listed here please let us know!

Mod
Thanks for posting, Malika!

is a free short story based on the Historical Fiction/Horror crossover, Absolom Rex. Its a quick read so drop by sometime, take a look and let me know what you think!

Mod
All right, so I just want to let everyone here know as well (since I'm spreading the word) that my blog tour for my newest novel On a Foreign Field: A Story of Loyalty and Brotherhood starts tomorrow. I'll be doing giveaways for copies and an amazon gift card as well as a free ebook day, so stop by on a few of the blogs to read interviews and guest posts so you can learn more about me as a writer and my books (and also a little of what is coming next!) I would love to see you there, but no obligation of course :P

If you check it out, I'd love to hear your thoughts.

Originally released as “Auslander,” “Foreign Son” is a re-working of Lewis Kelley’s first novel, and the first book in a series. He is also the author of Flight, Simeon’s Promise, and Consider Job.

Hazel wrote: "If any of your are authors and have a giveaway listed here please let us know!

From 9/29-11/1: a Goodreads Giveaway for "The Reckoning: Saga of a Civil War Blockade Runner"—10 free copies of this character driven novel, rich in historical details...part war story, part love story, it views the Civil War through the eyes of a reluctant hero, a man coping with Post Traumatic Stress Disorder.

Mod
Okay, so I'm just posting this here because I'm the mod :P

on e-book until the end of the weekend. So Monday, you will no longer be able to purchase it for that price and if you are interested, take the opportunity and buy it now!

You can buy it on Smashwords or Amazon
http://www.smashwords.com/books/view/... (also check out my short story "To Save a Life" while you're there

Mod
Trust me, I know. I try to balance reading and writing, but sometimes one overshadows the other, and it's usually writing. My characters are very demanding at times ;) Thats okay, I still have to rustle up money to buy your books. I really want to read your new one. I do like to support my fellow authors after all =)

I've got a giveaway that expires in a week. Offering two signed copies.

My name is Pauline Montagna, and my book, Not Wisely but Too Well, is being launched today. I'm holding a Free Giveaway between today and November 29 on Goodreads, but if you can't wait until then, take advantage of my Book Launch Special Offer. Until Tuesday November 20th, you can get a FREE EBOOK copy from Smashwords, (https://www.smashwords.com/books/view...) or a HALF PRICE PRINT COPY from Lulu (http://www.lulu.com/shop/pauline-mont...).

Keep a look out for my Q&A which will begin around December 15. My website is at http://paulinemontagna.net.


How did Will Shakspere of Stratford-upon-Avon, the son of illiterate parents, with barely a grammar school education, become the greatest playwright the English theatre will ever know? How did he learn his craft? How did he gain the knowledge his plays display? What was his own experience of the love, passion, pain and ambition he wrote into every line?

This is the story of how that journey began.
Not Wisely but Too Well

Mod
Hi Pauline, sounds like an interesting book =) I wish you best of luck with it.

Hazel wrote: "Hi Pauline, sounds like an interesting book =) I wish you best of luck with it."

I'm running a Goodreads giveaway: two signed copies of The Not Exactly Scarlet Pimpernel. It starts today and runs through December 31. US, Canada, and UK (but if Bryn can enter and win, I'll make an exception for her!).

Inspired by a true story of Rebel soldiers who disappeared in the aftermath of a Civil War battle.

It's 1899 in central Maryland when Tess McPherson marries into the powerful Wakefield family and moves to their historic estate, Soldiers Rest. Strolling the property, she finds an old abandoned greenhouse. Its panels are glass plate negatives from the Civil War era. In the panes, she can see the faces of Rebel soldiers. Who are they and why do they haunt her dreams? Tess is surrounded by wealth, tradition and a deadly secret. Check it out here at Soldiers Rest or at http://www.soldiers-rest.com

Mod
Sounds like a cool book, Kathryn. I'll have to check out your website when I get the chance.

why thank you! I hope you will read and enjoy (every writers' dream, eh?).
K

To celebrate the paperback release of The Ming Storytellers on 25 January 2013, I am giving away 1 Paperback copy to the lucky winner of this Facebook
Competition.

The winner will be announced on Facebook shortly after the New Year.
This competition is open to anyone. Best of luck! :)

The Ming Storytellers is a novel of intrigue and mystery set in Ming Dynasty China. More information on Goodreads, my blog or the novel's website.

Mod
I've got two giveaways running, one here on Goodreads for my brand new novel

and the other for my blog tour to win a copy of the backstories that go along with the novel. You can follow the tour and comment for a chance to win: http://hazelwest.blogspot.com/2012/12...

Yes, I have a giveaway currently listed with Goodreads. Beyond the Horizons is a novel of the Civil War in the West. There are five copies up for the give away. I hope you all apply.

I was thinking of doing a giveaway for my new book: IN THE BALANCE-A Collection of Short Fiction. Then it hit me: in all my previous giveaways, I've offered paper copies. The new book is only availalbe on Kindle.

Does anyone know how to give away a Kindle copy of a book?

Sandra, you can't—not yet. Not on Goodreads, anyway. The giveaways specify paper copies.

You can on LibraryThing, in case you want to join up there. I did an ebook giveaway with them.

Mod
Or you can just set up an 'unofficial' giveaway and just take down people's names and emails on your blog and here like I did for my tour giveaway (that's till the end of the month by the way :)

Hi, folks:
This is to let you know that my giveaway for The Golden Lynx starts at midnight tonight and runs to March 25 (that is, it ends 11:59 pm on March 24): two signed copies to anywhere in the United States.

If you belong to Historical Fictionistas, I am running a second giveaway there, for group members only, in conjunction with the upcoming group read, starting midnight tonight and ending 9 am EST on Feb. 15. I'm arranging that one myself, so it's one print copy for the US (e-book optional) plus two e-books overseas (ePub or MOBI). To enter that one, send me a PM that includes the name of your country. The mod has been sick and hasn't announced this one yet, but you can find out more at http://www.cplesley.com/home/hf-group....

I currently have a coupon available for free downloads of the first two books in the Assassin Chronicles as an omnibus on Smashwords. It is good until 2/20/13.
Code: FK64V
Link: http://www.smashwords.com/books/view/...
Happy Reading!

Mod
Thanks for letting us know, Brendan!

I think the hobbits have the right of it when they give presents
on their birthday so here's mine! A copy of The Inbetween, my dark age story
of myth and magic. It's free just for today. The
Inbetween 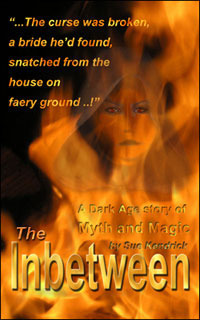 Sue wrote: "I think the hobbits have the right of it when they give presents
on their birthday so here's mine! A copy of The Inbetween, my dark age story
of myth and magic. It's free just for today. ..."

Not exactly a giveaway and not mine. But who wants to spend 99c on 600 pages of the best indie I have read? Seriously guys.

Mod
Thanks for posting, Amanda. Now if I ever get around to sending out another newsletter, I'll put it on there :P

A short story available from Knox Robinson publishers The Corbie Messenger - http://www.knoxrobinsonpublishing.com... which is a prequel / taster for

Thanks Margaret. I'm making a bit of a dog's breakfast trying to put this story on my page. It seems to have become the eBook version of the novel.

Hi everyone, My publisher is giving away 2 copies The First Blast of the Trumpet

Mod
Thanks for letting us know, Marie, I'll put it on the next newsletter =)

Thanks, Hazel. Much appreciated. :)

Only one day left to enter for a free copy

Just to say thanks to all who took part in the giveaway.
And congratulations to the lucky winners!

Mod
Not really a giveaway, but I've marked by novel Ballad of the Highwayman down to $2.99 on e-book for Mother's Day! Or for anyone else who wants to buy it cheep =)
http://hazelwest.blogspot.com/2013/05...

My book of historical fiction is available today for free on Kindle!

Go check it out!

Mod
Thanks for posting Phillip! I'll try to get that onto a newsletter this weekend.

Thanks, that'll help with some visibility.

Myk Prince of the Vends is a blockbuster action adventure set in the 2nd century. Newly released by AKW Books as an eBook, it's available for a limited time for free to anyone who'll agree to post an honest review on Amazon and GoodReads.

Send me a note if you're interested in this offer and I'll give you a one-time only coupon for Smashwords (so you can get any format that works with your eReader).

Contacting anyone on Goodreads is also easy. Click on the person's icon, then choose "send message" just to the right of the "follow reviews" button which is near their picture or icon.

* Editors note: "This is one of the best stories I've ever worked."

A remnant tribe from the once great Celtic nation, the Vends, is under attack by the slave trading Alan tribes, the warlike Suebi, and an evil Druid priest. Just to make things worse, famine and disease stalk the land.

What if, a small cavalry unit from the Roman empire, encountered a Mongol detachment of explorers, and fought a pitched skirmish? What if the Vends observed the skirmish and captured both the Roman and the Mongol survivors? Could the combined cultures produce a very powerful Vend tribe under the enlightened leadership of Lech and his wife Slava?

I'm giving away a copy of my audio book, "Knight of the Purple Ribbon". You can enter by sending me a direct message through Goodreads now through July 5, 2013.