I'm a bit dozy getting a thread going in here, as many of you will have noticed me around, and I know some of you have already read my novel, The Hunter Inside.

Here's the blurb for those who haven't:

Paul Wayans and Bill Arnold have something in common. Both men have received letters, threatening their lives. Sandy Myers, rushing from home with her 7 year-old twins in tow, grabs a letter from the mailbox. It is addressed to Sandy Carson. Her maiden name.

The past has caught up with them, and now their lives are in jeopardy.

But who, or what, is hunting them? Should they run, or should they stand and fight?

FBI Special Agent Sam O’Neill will fight desperately to solve a case that he could not solve ten years before. But can he find them before it’s too late? And if he does not, will anyone survive?

The Hunter Inside is a psychological thriller with a twist. It is a page-turning roller-coaster of a novel that you won’t be able to put down until all of its secrets, twists and turns have been revealed.

You can lock your windows and your doors, but you cannot lock your mind from The Hunter Inside.
---

I've been enjoying myself on Goodreads, but it's like a MASSIVE forum, so it's hard to get acquainted, settle in, and really feel like you're participating. I don't want to just be plugging all the time. I want to have a laugh and a joke and get to know people! I had a read through some of the Meet the Authors threads and thought they were quite funny thought I'd give it a shot.

So, edible handbag anybody? ;)

I like the edible handbag concept, but it would have to be a backpack for me as I don't do handbags. Hmm, would be interesting getting the right combination of durability and digestibility...

If I wrote a novel about edible handbags/backpacks, would that be chicklit?

I can see various tangents developing in here!

Its all the sines and cosines. . .

Hmmmm I think handbags are chicklit but backpacks aren't.

I can see why a backpack wouldn't be. It'd be more of a Lonely Planet type novel I suppose!

Maybe adventure... although I don't really go adventuring much with my backpack. Went off into the wilds of Norfolk last week, but thats about it.

You'd probably need a boat to go to the shop for a pint of milk the way the weather's been! Gotta love the summer in Britain!

Global warming, melting the ice caps. Although, I had to have my heating on this morning. In June!

We have indeed! Still took me a blummin week to see your reply though! You'll be pleased to hear that From the Sky - the sci-fi event of the 21st century - the new Close Encounters of the Third Kind (yada yada) is now past 30 thousand words! Did you get a chance to check out the first 10 thousand yet? It's really good, I promise!

I haven't had a look yet David - up to my gunwales in proof reading - I shall though.

Well done on the veg growing. That's what my blog's all about! I have several of my own varieties on the go now.

Yeah, it's a shame the temperature and lack of sunshine aren't conducive to growing copious amounts of veg. I left out sweetcorn from my list before, but I don't know why I bother - North-West England isn't the place to grow sweetcorn! Your veg breeding sounds really interesting!

Blog link on my profile page if you want to know more.

Yeah, just been looking at it, but you don't have a follow button on there. I'm going to create a Blogger account now just for following people's blogs, as I'm always seeing good Blogger blogs but am unable to follow most of them!

I think that's what Simon's Ring thing is all about. Near the top of the forum.

Finally figured it out and followed your blog. I also sent out a tweet to 564 followers, so hopefully you'll get the odd visit from that too!

I'll have to figure out something else now - Simon's Ring! NOt sure if I'll have problem getting the html code stuff, but will have to spend some time looking at it for sure! Sounds like a great idea.

I've just tried it and got a HUGE grey thing all over my page. Uncle Simon had better sort it out for me sharpish!

Ouch! My blog's getting tonnes of hits today, all thanks to the good man Joel Friedlander making one of my blog posts his 2nd top story in his blog round-up page forthis week - http://www.thebookdesigner.com/. Very pleased!

Have you added your blog to the group ring, David?

Oops, Sorry Patti - I did try but it looked a bit complicated and I admit to giving up easily! :)

Anyway...I've just popped in to give everyone a quick hi and some news. So...Hi everyone!

And the news is that The Hunter Inside will be free on Amazon between 25th and 27 August, so fill your boots! I've made an event for it on here, but it's playing me up something rotten with sending invitations out to people and doing my swede in!

So, if anyone who wants to read the book but doesn't want to part with their hard-earned then make a date in your diary for that weekend and you can have it for zilch!

It's a really good, rather scary read too!
I managed the blog ring David - a young whipper-snapper like you should be able to cope!

I know, but I'm meeting myself coming back I've got my fingers in so many pies! :o)

It's FREE, all weekend, worldwide!

Go and grab yourself a copy of The Hunter Inside!

Well done David. It's a jolly good read (If you don't mind being scared!)

Thanks Ignite! Lots of people apparently don't mind, because I've had almost 11,000 downloads this weekend! It's number 1 in the amazon.com top 100 free suspense charts, and 22 overall.

Well I paid for it months ago and I felt it was well worth it.

And you were the first person to review it on Amazon. Funnily enough, I've had a 4-star review today already from someone who downloaded it over the weekend!

Almost time for book one... 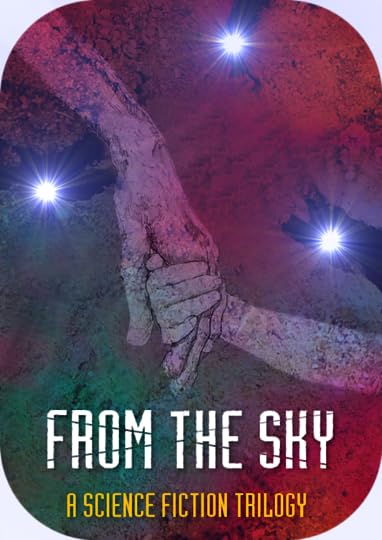 Guys, my new book comes out on Monday. It's the first part of a trilogy, and it's an alien invasion sci-fi whatsit.

I'm having a little shindig bash (just a Goodreads click yes to attend deal), and I'm offering copies of all three novels to five lucky winners.

Please share it around if you think people will be interested. Here's the blurb for Arrival, and thanks in advance:

When the ground starts to shake beneath their feet...
When the noises crash through the skies above their heads...
When the giant UFOs appear and send down their beams, their terrible beams...

Everything changes in Camberway, as a series of bizarre events changes all of their lives, forever.

What will become of Camberway, and the people who call it home?

Will anyone survive? Why are the giant UFOs here? What do they want?

Yo, David! Looking forward to reading that. I enjoyed The Hunter Inside - Good luck with the event.

Thanks Kath! Numbers are sloooowly building!

Hey guys! Check out the trailer for From The Sky - it almost killed me making it, so please take five minutes out and watch it...especially if you like Spielberg-esque stuff with UFOs! :)

I promise you'll like it! The book is ridiculously cheap on Amazon with it being launch week too, but I'll have to increase the price before too long...I've got bills to pay! ;o)

Bought it and tweeted and Facebooked (yesterday). It's my next read!

Wow, that's great. Thanks Kath. I really appreciate it! :o)

I can't find the new book on Goodreads David. I want to add it to my books - I'm half way through and love it.

Thanks so much...I'm delighted you're enjoying it! :o)

Thanks! Can't wait to hear your thoughts when you finish! :o)

Finished - and it's a cracking sci-fi First Contact story. Great characters (which doesn't mean you like them all!) and a story that's gripped me - Part 2 soon, please!

Thanks so much Kath. It's nice to see those 5 little gold stars under the title on Amazon, and really great to see it on your blog too!

The Hunter Inside (other topics)