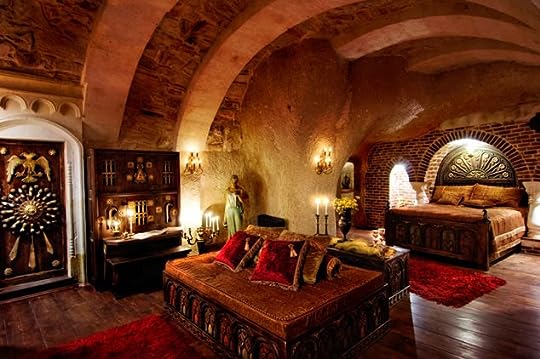 Loren was bored this afternoon with nothing to do so she went to Noctis' chamber to see if he would give her some company, she knocked softly on the door not giving him a clue to who it was

Noctis was hunched over his work table, drawing out battle tactics and plans, grunting and snatching the paper, crumbling it, and throwing it aside with ferocity when he would fail miserably-or as he saw it. His room was now littered with crumbled and used paper, and he showed no signs of discontinuing his fervent writing and drawing. A knock brought him from his work and he immediately snapped out of his obsession, glancing at the door in apprehension. It was rare for anyone to visit him. He opened the door and was stunned to see Princess Loren. He bowed quickly before asking, "What are you doing here, m'lady-is there something you need?" He asked.

Loren peeked into his room "Where you working? Shall i leave, i don't want to be a bother." she said quickly

"No, you do not have to," he murmured."I am only working on my own accord," he proclaimed, opening the door wider so that she could come in if she pleased."Sorry, about the mess," he left the door open as he quickly began to clean up the papers and throw them away.

Loren walked into his room "I'm sorry to intrude i just stopped by to see if you would mind keeping me company i've been very bored this afternoon."

After cleaning up all the paper, he glanced at the princess and shook his head."Anything for the Princess," he simply stated with a smile. He closed the door after she walked in and sat back at his desk, resting his hands behind his head."Any meetings, conversations..." His voice trailed off as his smile grew."Anything interesting happen at all?"

"Nothing interesting im afraid." she simply said as she sat on his bed
((I have no idea, you can deceide))

A messenger knocked loudly on the door.

"Ok..." He murmured, dark eyebrows furrowing as he tried to conjure up a conversation starter. Perhaps he should just ask her about herself, given he knew practically nothing other than her name. Nah... it was not in his position as a Knight to ask mundane questions as such."I, on the other hand, trained all day, so I suppose my day was not that much more eventful than thou own," he proclaimed. Then, suddenly, a messenger knocked at the door and he was quick to answer it with apprehension on his face."Yes?"

Loren got up to see who it was "Oh why hello." she said

"Princess Loren your mother would like to see you in her chambers," the messenger.

Loren looked at Noctis "I will see you later." she nodded her head and walked witht the messanger to her mothers room.

Sauntering into his room and throwing his sword and archery set onto the bed, he sighed and closed the door behind him. He removed his shirt and his pants, replacing them with new clothes that were more comfortable and suitable. Pushing the bookshelf next to his bed away, he swapped his usual sword for a custom made sword that he had made awhile ago, a sword that was made to fold into and out of a gun form to a bow form. He strapped it onto his back on the holster and ruffled his raven hair, sighing. He then left to the village.