This group of Tharians can be skilled in many things, including swordsmanship, archery, horsemen, and the like. They are the main group that will fight in the war against the Nirasians. Now, you can only have one skill. No mas. Most fighters are male.


Name:
Age: (An average Tharian is about 4 years old; which is like 30 human years. 3 years, probably 21. 2, 13 years. 1, 9 human years. Then you go into months, but I would just stick to years.)
Gender:
Type: (Archery, Horsemanship, Swordsmanship, etc.)
Appearance: (I would go into detail here. Remember, they are half-human, half feline!! Maybe a pic ***anime probably will be your best bet!*** and at least 4 sentences.)
Personality: (Again, go into detail, and at least 4 sentences.)
History: (Same as above.)
Crush: (If applicable, and you have to ask!)
Spouse: (Same as above.)
Other:

Type: Chakrams, usage of these require a lot of hand-to-hand combat 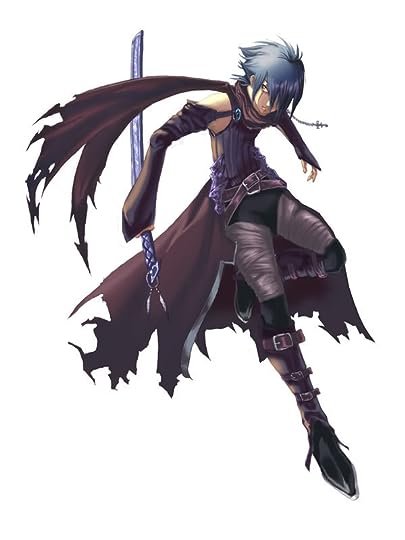 Willow has a slim athletic cat-like build, his skin is a fair pale shade that contradicts his sleek jet black hair as well as fur. He face is full of angular sharp features along with his deep violent toned eyes that pierce through you. A scar is drawn over his left eye. His large cat ears poke through his semi-long hair, and his tail is slender and strong. His form is built well for agility, balance, and graceful movements.

Personality: Willow is a little bit strange, and somewhat mysterious and hard to understand. He doesn't very much say much or comment, though in a way he seems to say all lot without saying anything. Willow is a bit more cat like than most, a little less human, not to say that he is wild, in contrary he keeps himself at a dangerous sort calamity. Instead of speaking, Willow watches, he observes, he learns, he remembers, Willow will notice details and things that most people will miss. Though you might not suspect it, Willow is extremely sly and clever, somethign to beware in that area. At moments, it seems almost as if he is a cat by the way that he moves around, the way he will watch you with his large eyes, you almost wander if he can't speak. A lot about Willow is sort of unexplainable, but one thing you know for certain is this. Willow is incredibly reliable, and will carry a fierce loyalty to the end, he is definitely one to put your trust in.

History: Willow was orphaned as a child, his parents assumed to have died in a clash from the Nirasians. Willow was found in the remains of a village by the border, a child crying surrounded by wreckage and death. The Tharian army didn't make it in time, and all they found left was Willow. Willow was taken in to be raised by the army, so it is fair to say that his childhood would have been quite different then what one might call normal. In fact, it could be said that he never really had an actual childhood, neither did he have parents or siblings. This might be some of the cause for the strange attitude and behavior that he shows today.

trying to decide whether that reaction is good...or bad >.>