Hi! I've just published my first YA novel through Harmony Ink Press. My website is: http://jameserich.com

Welcome to the group - how about a link to the book here on GR. This one, right?

Yes, that's it! I was about to post it when I got a phone call, so thanks for digging it up.

The novel was just repleased this past weekend, on June 1st.

James wrote: "Yes, that's it! I was about to post it when I got a phone call, so thanks for digging it up.

"Seidman" is a YA novel about Vikings with a couple twists: 1) it isn't about a boy who becomes a war..."

Congratulations on the release! Very cool to get something a bit different in setting and story line.

Camiele, from YAM Magazine, interviewed me during the YAM 2012 LGBT Blogathon! Here's the link:

"Seidman" was also given 4 out of 5 stars in its first review by YAM Magazine!

James wrote: ""Seidman" was also given 4 out of 5 stars in its first review by YAM Magazine!

Congratulations. Nice to see YA getting reviewed.

Thanks! I'm thrilled with the review!

My new release, "Dreams of Fire and Gods: Dreams" is coming out on December 15th! It's a high fantasy novel about two young men, a peasant and a noble, caught up in a war between two factions of gods.

"A thousand years ago, two factions of gods, the Stronni and the Taaweh, nearly destroyed the Kingdom of Dasak by warring for the land and the frightened humans who lived there. Then suddenly the Taaweh vanished and the Stronni declared victory.

Now, as tensions escalate between the emperor and his regent, Vek Worlen, the Vek's son, apprentice mage Sael dönz Menaük, finds himself allied with a homeless vagabond named Koreh. Together they flee the capital city and make their way across a hostile wilderness to the Vek's keep, mere steps ahead of the emperor’s assassins.

But Koreh has dreams—dreams of the ancient Taaweh—and he knows the looming war between the emperor and the Vek will be nothing compared to the war that is about to begin. The Taaweh are returning, and the war between the gods may destroy the kingdom once and for all."

Now let's see if I can get the cover to show up: 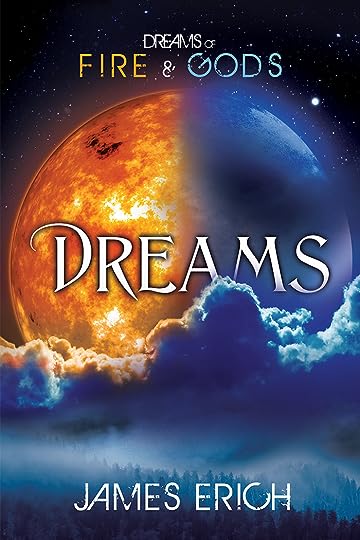 Ooh, I do like that cover. Is this one pure fantasy or does it have a historical basis like Seidman?

This one is pure fantasy. I created a fictional kingdom called Dasak, fought over by gods called the Stronni and the Taaweh. It's book one of a trilogy.

James wrote: "This one is pure fantasy. I created a fictional kingdom called Dasak, fought over by gods called the Stronni and the Taaweh. It's book one of a trilogy."

I figured there was going to be a series from the cover - sounds fascinating. Best of luck with the release.

*waves* I shouldn't be surprised to find you here, Mr. Erich, but strangely, I am. I always expect writers to be reclusive even though I'm not myself. How is Seidman doing? I read it months ago and thought it was cute -- good way to pass the time.

E. wrote: "*waves* I shouldn't be surprised to find you here, Mr. Erich, but strangely, I am. I always expect writers to be reclusive even though I'm not myself. How is Seidman doing? I read it months ago and..."

I think it's doing well, considering it's from a first-time YA author and published through an imprint that's in its first year. The honorable mentions from the Rainbow Awards were a huge boost to my self-esteem. :-)

James wrote: "I think it's doing well, considering it's from a first-time YA author and published through an imprint that's in its first year. The honorable mentions from the Rainbow Awards were a huge boost to my self-esteem. :-)
..."

It's getting a lot of positive notice around here (including mine - I really enjoyed it :)

Incidentally, if anybody is interested in chatting with me this Saturday, December 15th, I'll be hosting an author chat on the Harmony Ink Facebook page ( https://www.facebook.com/HarmonyInkPress )from 1pm EST to 6pm EST.

I signed up for bloghop hosted by Sharon Bayliss on worldbuilding ( http://sharonbayliss.blogspot.com/201... ) and today is the first day. The idea is to take a fictional world you've created and challenge yourself to see how much detail you can come up with. Every day is a different challenge, through the rest of the week. The challenge for Day One was to describe the geography and climate of your world.

Here's my first post, about the Kingdom of Dasak, from my "Dreams of Fire and Gods" YA fantasy trilogy:

I’m very excited to have book two of "Dreams of Fire and Gods" (called "Fire") hit the shelves this coming Friday, March 1st!

I was also notified of two new reviews I wanted to mention:

Rya at Hearts on Fire Reviews gave "Seidman" 4.5 stars, saying that “The stages of Kol and Thorbrand’s friendship are beautifully presented. I enjoyed their together-scenes a lot. There is so much innocence in their actions and the transition between hugs and kisses was cute, if I may say so.”

"Dreams of Fire and Gods: Dreams (book one)" likewise received a 4.5 star rating from CrossroadReview on NightOwlReviews, saying “And let me tell you it is good! He build such a great fantasy world that you just couldn’t stop reading it! I just can’t get over how good this book was! I’m looking forward to more from this author.”

Congrats on the reviews and the new release!

Very cool. I like the interview (wouldn't turn down a few doting servants myself.) And yes, that was one of the things I liked about Seidman - a feel for the home life of the period.

Congratulations on Dreams reaching the Honorable Mention level of the Rainbow awards - good luck in the finals.

Hi! I just wanted to mention that the third and final installment of my "Dreams of Fire and Gods" series, called "Gods," will be out in just 15 days!

Long ago, two factions of gods, the Stronni and the Taaweh, nearly destroyed the Kingdom of Dasak in a great war. The Taaweh vanished when their queen was imprisoned, and the Stronni declared victory. A thousand years later, a young nobleman named Sael and his lover Koreh have rescued the Taaweh queen. In the process Koreh was killed, and now an injured Sael struggles to heal from both injuries and grief. Unknown to him, Koreh embarks on a journey across the land of the dead, trying to make his way back to Sael—and to life. But time moves differently in the underworld, and decades pass while Koreh travels.

In the living world, tensions between the emperor and Sael’s father, Vek Worlen, who is regent of the eastern kingdom, have soured beyond repair. Worlen conspires with the assassin Donegh to break into the imperial palace and challenge the emperor to a duel to the death. But the goddess Imen has chosen a young priest named Gonim as her champion. Through him she discovers the Taaweh have returned, and her enraged king threatens to destroy Dasak and all its human inhabitants. Sael must save his world, must confront the gods and persuade them not to destroy humankind. But it seems hopeless. If only Koreh were at his side…

Great timing - and it sounds good.

If anyone has some free time this afternoon, I'm taking over the Harmony Ink Facebook page ( https://www.facebook.com/HarmonyInkPress ) to chat about my novel

that was release today, finishing off the "Dreams of Fire and Gods" fantasy trilogy.

Congrats on completing the trilogy :)

Thank you! It's definitely nice to have it all wrapped up.