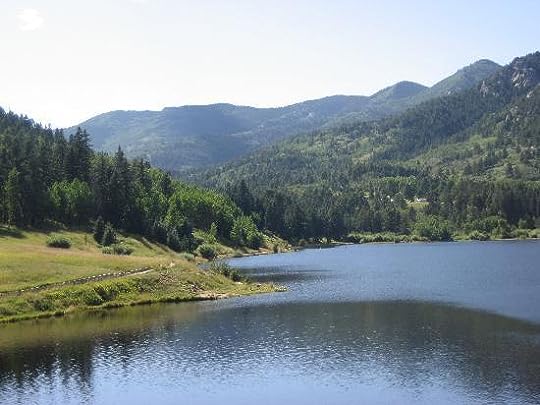 Pulling his hoodie over his head to keep some of the water from his eyes, he wrapped his arms around himself as he neared the river, glancing back every now and then to make sure the exotic kittens were still following him. However, as he could hear their constant growls and meows, it was not necessary."Ssh! You may attract attention," he scolded as he crouched to the water's edge, though Ace and Spade obviously did not understand and kept making noise as they played in the water, trying to catch fish despite their relatively young ages. He grabbed a few canteens from his pockets and began slowly filling them up.

reply | flag *
message 3: by [deleted user] (new)
Jun 07, 2012 10:58AM
Soliloquy wrote: "Pulling his hoodie over his head to keep some of the water from his eyes, he wrapped his arms around himself as he neared the river, glancing back every now and then to make sure the exotic kittens..."

The presence of another living entity bothered him to a rather immense extent, albeit given this so called individual was a distance away from him and was silent, he decided that as long as the person did not bother him in any way that agitated his anger, he would let the female remain where she was without any of his own transgressions opposed to her.

Noctis glanced about, pulling Ace and Spade closer to him like children, telling them to hush when they began yowling in protest."Shut your mouths, I am trying to protect you silly little fools," he murmured, kissing them on top of the heads to inform them that he never really could get seriously made with them, they were too cute for his anger to devour. He was not worried about the girl who had been dancing, for she seemed to actually "fear" him, which meant that she probably would not be going anywhere near him. Albeit, when he glanced at the girl who had come from the trees, she did not seem scared or mad at all… in fact, she seemed apathetic, which could be a problem. He put the canteens back into the pockets of his jacket and stood, gathering Ace and Spade in his arms like babies, watching both Sammy and Kalue with apprehension.

"Yeah, try it," he dared, his eyes narrowing as he set the two small exotic cats down, putting his hands behind his head in a realaxed manner."I will kill you and the cops," he proclaimed.

Mod
Crystal walked and walked. She soon found herself at a lake. She didn't bother to look around. After all, it didn't matter to her. Sooner or later the cops would find her. Crystal took off her shoes and dipped her feet into the cold water. She sighed heavily.

Mod
Crystal heared Sammy, "If you want the death wish, come to me. I can help you with that." She smirked and turned around

Mod
Crystal raised an eyebrow, "I'm not related to anyone.."

Mod
Crystal tensed up, "I have no one." she whispered

Mod
Crystal smiled, "Nice to meet you." Crystal didn't let her shake her hand because of her scar. It usually freezs people out. Crystal put her shoes back on while talking, "Are you a fugitive?"

Mod
Crystal bit her lip. Should she tell her? Will Kalue tell the cops? "I, well-" she paused debating, then she desided to tell her, "Yes." she whispered

Noctis sighed, closing his eyes as he tried to press down his growing agitation. Here he was, with an idiot rolling on the forest floor, and two others talking about their personal lives."I did not ask for a life story, get all sad somewhere not around me," he murmured begrudgingly.

"No, but I definitely did not choose to hear it," he answered, murderously calm about it despite her fierceness. For he knew, by sheer confidence, that Kalue would not stand a chance against him if he chose to put her in harms way on his own accord. He glanced at Crystal, almost forgetting who she was and wondering why she had called him Aid when he remembered that was the fake name he had given her."Hng," he huffed, clearly unwilling to communicate at this point.

Mod
Crystal continued to watch Aid for a while, but then she stopped. She sat down on the grass and crossed her legs occasionally looking up at the sky. Today is a pleasant day, she thought to her self. Mitco ran and caught up with his owner. He laid by her side and began chewing a bone that he brought with him. Crystal paid no attention to her dog.

Mod
Crystal saw Kalue from the corner of her eye. She turned and waved back to the girl and then she turned again.

Mod
Everyone was leaving. Well, everyone but Aid. She looked at him, "How long have you been running?" she asked, hoping to start a contersation

Noctis glanced up at the sky, humming absently to himself as he thought of an answer."About a year..." He answered finally, shrugging nonchalantly as he heard the car start and leave off in the distance.

Mod
"Me too." She said while petting Mitco whom was slowly falling asleep. Crystal put a stray piece of hair behind her ear and she laied down on the grass.

"What did you do?" He asked, though curiosity was not exactly in his voice, it was clear he was inerested in knowing what it was that made her on the run.

Mod
She shrugged, "I don't know. My step mom signed me up as soon as my father passed away. My mom died in an accident long before that..." She trailed off thinking of her deceased family

Noctis looked somewhat disappointed. The story had not been interesting at all. If it were not for the sign up, she would be another normal citizen."I killed my father and my step mother," he proclaimed nonchalantly."I killed others, too... I am known as the Ace of Spades," he murmured. Given he usually stuck an ace of spades card in the corpse of his victims, that was what he was known, albeit no one knew his face.

Mod
Crystal nodded, "Impressive. I can't do that. I'll feel remosceful at the end." she smiled at him

He shrugged."Sometimes I do... I think I have a disease... Sometimes, I kill someone just because they make me panic and feel vunerable, and feeling vunerable means I have no control, which is my worst nightmare," he murmured, glancing at the ground."What are you even doing out here?" He asked.

Mod
Crystal shrugged, "I'm not sure. I just go anywhere really." She looked at Mitco and then back at Aid, emotionlessly, "Speeking of going, I'm afraid that I have to go. I'll see you around." Crystal said as she started walking. Mitco followed her close by.