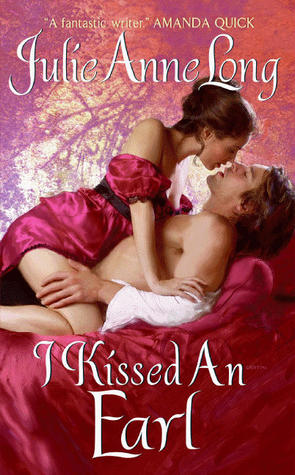 I Kissed an Earl, by Julie Anne Long

Violet Redmond's family and fortune might be formidable and her beauty and wit matchless—but her infamous flare for mischief keeps all but the most lionhearted suitors at bay. Only Violet knows what will assuage her restlessness: a man who doesn't bore her to tears, and a clue to the fate of her missing brother. She never dreamed she'd find both with a man whose own pedigree is far from impeccable.

"Savage" is what the women of the ton whisper about the newly styled Earl of Ardmay—albeit with shivers of pleasure. Born an English bastard, raised on the high seas, he's on a mission to capture a notorious pirate for vengeance. But while Violet's belief in her brother's innocence maddens him, her courage awes him . . . and her sensuality finally undoes him. Now the man who once lost everything and the girl who has everything to lose are bound by a passion that could either end in betrayal . . . or become everything they ever dreamed.

After winning the poll vote, this is the W♥LK Book Club choice for June, 2012. It is #4 in the Pennyroyal Green series.

I haven't read this one but I heard all about Violet from How the Marquess Was Won. I love Julie Anne Long's writing but idk whether I should get this. Looking forward to all your thoughts about it though :)

I'm not sure I've ever read her....i have to look more into her...she's been around awhile.

I grabbed it when it was cheap on Amazon (can't remember the price). But I noticed that it is $1.99 on Google e-Books right now: here. I've never purchased anything from them, so I'm not familiar with the quality.

I've read this one. Hope everyone enjoys it. It was my first by the author. I have a couple of her other books but have not read them yet.

I just finished it... I'm curious what everyone thought of it.

I just finished, too. I thought it was a good read, and I'll be adding more Julie Anne Long books to my TBR list. Violet and Flint are a good combination, and scenes sizzled with intelligence and chemistry. Le Chat was a fun way to keep the plot moving. The ways in which Violet and Lyon kept in touch were inventive. The end seemed too much of a turn-about, too quickly. But at least everyone gets their HEA.

The only thing I DON'T like about Julie Anne Long is that she italicizes/emphasizes words throughout her entire novel, which forces the reader to read sentences HER way, instead of the way I would have emphasized them. I found it annoying and unnecessary.

For this reason, I'll give it only 4 stars.

I really enjoyed the entire series. However, I certainly didn't like the books equally. Long's style seems to change somewhat from one book to another. My favorites were Like No Other Lover and How the Marquess Was Won. Great stories with scenes that were soooo funny! The series is definitely worth reading and I am looking forward to the next one.

I was actually really disappointed with this book. Since this was the first book of Long’s that I’ve read I’ll give her another shot, but I was expecting better. My biggest problem was that I didn’t feel any connection between the characters. And while I liked Flint, I did not care for Violet at all. There were two life and death experiences that I thought would evolve into an emotional moment that would develop the relationship in a deeper way, but it never happened. I didn’t believe in them. I also wasn’t a fan of the writing style.

One part that I thought was good was Violets final note about Flint. I thought that was sweet.