I loved this. The design aesthetic is what I've come to expect from a Hickman book (beautiful!) and Pitarra's detail on some of those spreads really immersed me. Its a great sci-fi short story and was perfect for the mini-series format.

I don’t think the explanation for the lack of time paradox (you know, like in the Back to the Future movies) makes any sense.

All that talk about each moment having a different frequency doesn’t change the cause/effect relation. Meaning: if you change the past, it will logically still affect the present you came from.

Did anybody understood the reasoning of the writer in this? Because his concepts don’t seem to work even as pseudoscience.

About the art, it seems that Pitarra had a hard time meeting the deadlines. There are a lot of panels that really look sloppily finished.

I have to disagree with you, Chris, on the designs. To me it looked like he didn’t spent enough time in developing the designs to make them interesting. An example would be the suits that the bad guys wore – they looked funny to me because it seemed as unsubtle a choice as having them with “EVIL” written in their foreheads.

We can also see this was a rush job looking at his depictions of Paris or Mayans pyramids. Not really convincing in my opinion.

On the positive side, there’s some influence by Frank Quitely I think, which is nice and I really liked this page: 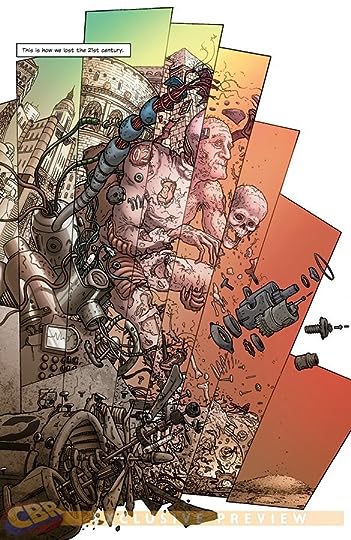 I'm with you Sergio - I didn't buy this one at all. For just about the first time, I don't think I've got anything constructive to say about this book. I hated it. Conceptually and narratively, it's just a mess, and I didn't even enjoy the imagery.

Shame, but there you go.

I have to say that I liked this book on a first read - I am going to read it again before making a final judgement. A story of this nature has to be self contained but I thought it was maybe a little too short. I whizzed through this book very quickly and another issue or two might have been beneficial to help explain the set up better.

I have to say that the explanation behind the story didn't quite work for me on a first reading either. Though I thought that he later expanded the theory to having horizontal stacks which to me suggested parallel time streams rather than a single one. This would then allow the invaders to rape the resources of a time period without causing a ripple effect later in their own. ?!?!?!?

I love stories that involve time travel and the best ones always leave me with a sore head as I try and figure out what is going on.

I liked the art in general but the design on the ships seemed a bit lazy. The art reminded me more of Bryan Talbot in places and Geof Darrow in others rather than the cleaner lines of Frank Quitely.

Well the blue ones are jumping from another time line apparently, but the red ones are travelling always through the same time line. So the time paradox would apply for the reds.

True, that is why I think he needed an extra issue or two to explain his world better. The only glimpse that we see of the 23rd century, outside of the ring, looks very futuristic and peaceful. The story didn't really show us the effects that the invaders were having on the reds.

Okay, I finally got around to getting a copy of this book. I still have a week and a half to go before the month's over, so I'm not late, I think.

In this case, I generally liked the story as a single graphic novel unit. But as I read the book I strongly felt that I probably would not have liked it if I had read it over a period of months as issues. For one, the ending wouldn't have been worth the wait with no sense of resolution, and for two, there were too many stylistic choices that reminded me of previously seen problems with serialized comics. The most egregious was the repeated pages of negative space. I remember the fits that occurred when this was done in Zero Hour: Crisis in Time back in 1994. (Funny that one also had a time theme, but it stayed mostly linear.) While the negative space application works in this collected format to give a sense of a silent expanse, I wondered if it was being overused when I saw it being used twice.

Themes of interest in this story that I observed and wanted to mention included the not-quite ouroboros that is used as the book symbol. It looks like its just about to eat it's own tail, but never progresses. Could this be tied to the spiral depicted in time (replacing a linear system or a loop, either of which are more commonly used depictions)? I didn't care much for the frequency description, as every time it is mentioned I interpret a longitudinal frequency because of the spiral stack depiction, but references to red shift and blue shift would indicate a transverse frequency from the electromagnetic frequency shifts.

I did find the dedication page interesting, considering the familial themes in the book.