Just a place to say hi, really - so far I've only seen one other person from the UK, one from Portugal and I know there are some German folks around too! So say hello if you're somewhere between Ireland and...and...where does Europe finish again? 3-4hrs east of GMT roughly, anyway. :)

Hi! I am GMT and in Britian.

Hi :) I am in Germany, originally from the Netherlands though (don't think I'll ever truly see Germany as my home, even though I've been here for almost 7 years now :P)

One more Germ over here...

Wow that is close I live in Stoke-on-Trent! Small world!

I'm a Bulgarian, but live in Erlangen,Germany :)

Germany here.
I live near Hamburg.

Not bad - keep 'em coming! Maybe we can work out how to do a hang-out sometime. :D

Manchester, UK now, from Surrey though :)

Oh hey, you're my nearest so far! I can get into the city in 35mins with a following wind and a clear M60 ;) Was a student there for ages.

Hello there! I'm from Portugal :)

Caroline wrote: "Just a place to say hi, really - so far I've only seen one other person from the UK, one from Portugal and I know there are some German folks around too! So say hello if you're somewhere between Ir..."

My hometown stays west of Ireland and it's still Europe :P

Of course it is. My apologies. I suck at geography!

No problem, I was just being picky! ;)

Not at all, you're absolutely right. I must admit I was worrying about the opposite end of Europe as I never know where the line is "supposed" to be and how people feel about it - heaven knows I get muddled enough about where *I* live!

Yes, I can totally relate to that! I'm also not an expert in geography, but being born there it's easier to know about it! My hometown is almost in the middle of the Atlantic, there's not much Europe west of that :)

Out of curiosity, have any of the Europeans been able to watch the discussion live?

Caroline wrote: "Not at all, you're absolutely right. I must admit I was worrying about the opposite end of Europe as I never know where the line is "supposed" to be and how people feel about it - heaven knows I ge..."

I think the official end of Europe (one point at least) is Yekaterinburg in Russia - friend of mine went there while we were on our year abroad so she could say she had stood with one foot in Europe and one in Asia... :) 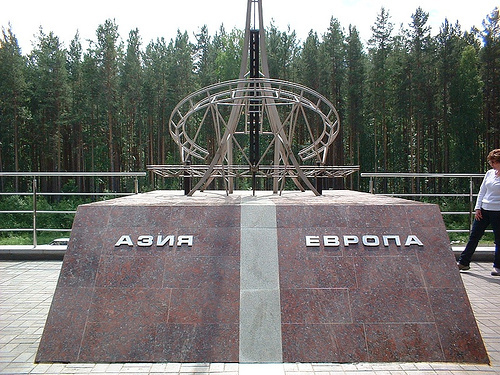 Beth wrote: "Out of curiosity, have any of the Europeans been able to watch the discussion live?"
At 5am?? With two little kids, ain't no WAY I'm getting up at that time unless I'm clearing up vomit..;-/


Emy wrote: "*Googles* Hmmm, yup - here's the spot!"
I see! That is interesting - a lot further East than I would have guessed, given the countries to the South. Thanks for that!

Yup, I've managed to get myself out of bed just a little before 5 AM so I could watch it and be in the IRC. Was a lot of fun, and a much better way to start my day than usual. I'll be doing it again.

I got up at 5am too to watch the hangout, but as there are some stupid illogical laws here in Germany the live stream was blocked and I couldn't access it.

Anyways, just a quick question to the german (and possibly dutch) people: is anyone living somewhere close to Düsseldorf?
And to the scandinavian people: if you plan to have a hangout in mixed swedish-norwegian I'd love to participate as my norwegian could really do with a bit of brushing up ;) Though that might not be so fun for you to watch me searching for words... umm

For the Eurozone-hangout: rather than 5am maybe a better time would be around 9pm for CET which would mean 8pm in western europe and 10pm (or even 11pm?) in eastern europe? Or do you guys think that's too late?
Also I had a look at the whole hangout thing and it seems that a maximum of 10 people can participate actively in a google hangout, so we might have to split it up, or just see how many people actually show up at the set date and time.
Which brings me to my next question: do you guys think we should have the hangout before or after the ladies have their official live stream? In a way it would be nice to discuss the books without the previous influences as otherwise there's a chance we'll only discuss the things brought up in the live stream, but then again, we have the forums for pre-discussion so a hangout afterwards would be good. (Did that even make sense?) Also we wouldn't need to finish the books before the live stream.

Last time I did (without confusing my time zones). Still missed half an hour until I figured out what's going on with Youtube blocking it and how to work around it.

Of course it helps that I generally wake up at 4, can't sleep and finally give and get up at 5am anyway... including weekends. Even a screwed up sleep cycle can have its good sides.


Considering the time for a local hangout. I guess it should be a window that ends up between 7pm and 10pm, so the working crowd has a chance to get home from work before and get enough sleep after.

Maybe the day before "the" hangout. It would allow to bring up issues or questions that arise for the main hangout. Or post a quick summary of the local hangout on here to consolidate all the things that were talked about.

Hi, My name is Laura and I'm in Huddersfield, England. I'd be really interested in a local hangout, but can it be when the kids are in bed please? That would be awesome!

Who would be actually chatting? I don't think we can all chat at once can we? I have no idea how it all works.

Also, I thought about catching the hangout live, but over slept, I also have two children and I don't think I was ever that serious about the idea. I love watching it though. This is also the first time I've tried to read the reading material in time and I'm a slow reader, wish me luck! x

Ooh that makes two of us then :D

Copenhagen, Denmark for me :)

I have not figured out how to watch it live yet, but I do enjoy them after the fact :) I have yet to read any of the books though, I never was all that much into romance novels, but we'll see what happens :)

A European hangout would be really interesting, I am in! :)

Hello, one more from the Netherlands here. :)

Another one for the UK, York if you want to be specific :)

Edinburgh. Glad to see there are other Euro members who struggle with the live time too! Makes me feel a bit better about missing out.

I'm a Brit in Switzerland. Based in Basel, so kinda close to some of you in Germany.

Hiya! A quick glance and I guess I can call dibs on being first Finn (?). To be more exact Turku, Finland :)

Hi everyone!
I live in Germany as well and I would really love to have a european-area online hangout some time! Did anything like that ever happen so far?

Also: Is it still a problem to access the live stream in Germany, are there any news? I have to admit that I'm a real noob to the Vaginal Fantasy Hangouts (but clearly addicted, I am watching all the previous hangouts at the moment) and I'd love to tune in on Oct. 30th, but now that I've read that there are issues, I wouldn't want to wake up at 5 a.m. just to realize it doesn't work..

anybody up for an actual local hangout near any of these locations and is/ has anybody (been) meeting online? I would really like to join them/ you! please let me know! thanx