Appearance: Dark brown hair and brown eyes, Gisa looks like almost any other girl in Republic City. And though fully grown, she is below average height. She has stylishly bobbed hair, but leaves two locks on either side to braid in the old style. 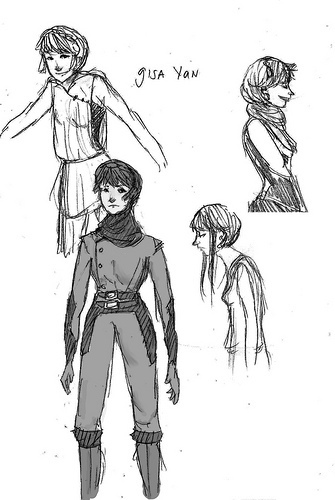 Personality: Gisa is a hardworking girl. She takes on multiple shifts at the store to help her family, and even though it detracts from her social life, she enjoys it. Gisa is good at selling. Selling dumplings, spices, even herself. She is good with people and often talk them into buying more than they want or need. Gisa pretends to be different girls in front of customers because it sells more things. In front of old men, she will bring out her sarcasm and sass; young children, her maturity, but childlike playfulness. She masks things very easily, and uses this to her advantage.

History: From a young age, it was hammered into Gisa's head that after her parents died, she and her brothers would continue running their small family shop. She is trained to do whatever, from carrying crates to ringing up customers, to restocking and sweeping. As a non-bender, Gisa would see benders using their abilities to get the upper hand right out on the street. But, she couldn't do anything. One day, while she was in the back, helping taking inventory, a fight sprung up on the street with members of the Triple Threat Triad and the Avatar. They destroyed the windows and many items on the sales floor. Gisa realised she harboured quite a bit of resentment for benders over the years (she also just had a break-up with a waterbender), so she decided to join the equalist movement and is trained to be a chi blocker.

Fears: She fears that if the bending customers of the shop found out that she is a chi-blocker that they will destroy the shop completely and put her family in financial and emotional ruin.

Job: Works at her parent's shop as basically free labour.

Wow! You are such a talented artist!

The Legend of Korra - Official Roleplay