Mod
Name: Fierce-Hawk-Flies-Past-Snowy-Dawn (Fierce)
**I wasn't sure about the naming protocol, so I went with how wolves are named in the book I'm reading, The Eye of the World. The names are more like a series of pictures and feelings that are sort of summed up into a few words, though they don't encompass the entire meaning. So maybe these wolves' names could be like that? Just a suggestion, since you don't seem to have a preference.**
Gender: Female
Age: Three years (adult, not sure how old that'd be)
Rank:Beta
Pack: Starlight

Appearance: Fierce is a light gray-and-black she-wolf with tufted ears and silky fur. Her eyes are a sky blue, almost white color that mirrors an icy lake or a clear, cloudless day. Her ears have escaped damage so far, a miracle to a wolf of her adult age. Her loping grace is deadly in its accuracy, and she lives for the hunt. Fierce will do--and has done--anything for the Starlight pack, which has earned her a place near the top of the heap. Her strength and stealth go paw-in-paw with her hardened demeanor, and she is a wolf of very little words. She would much rather use her eyes and ears and whole body to communicate, rather than anything that can be heard by enemy or prey.

Personality/History: Fierce is, well, fierce. She will do anything for Starlight pack, and will protect her pack at all costs, making her a valuable beta. She is always alert and ready to spring into action, and harbors a special hatred for the Silverlight pack. In a minor border clash moons ago, a Silverlight wolf took the light of her mate, Rook-Soars-Falls-Graceful-Deer-Leaps-Past-Mountain. Fierce took that she-wolf's life in return, but that couldn't bring Rook back. Ever since, she has been itching to overturn the balance of power and to put the Starlight wolves at the top.

Kin: Anyone?
Mate: Rook-Soars-Falls-Graceful-Deer-Leaps-Past-Mountain (Rook) (deceased in a border skirmish with Silverlight pack), and she hasn't looked at any male since.

Mod
Your pic is sorta big... but I LOVE the character, Lauren!

Appearance: https://ontariossunsetcountry.ca/ssci...
Shift is an all black speciman of wolf with a ragged look about her body, but a sleek and smooth look on her face, tail and legs. She has beautiful white teeth that are especially sharp around the fangs. She has small paws and a pretty wild look about her with a flash of disturbance in her eyes.

Personality: Shift isn't...all THERE. She's a bit crazed, but she can contain herself and put up a bubbly front around her pack mates. She's even a bit flirty! However, when out hunting, she's a deranged animal with a nasty bite and a knack for bringing down even the biggest of problems.

History: Shift used ot be a normal wolf, until she got in a fight with another wolf from an unknown pack, possibly a loner. She was pushed off from a great height and hit her head. The pack's shaman tried their hardest to restore her, but while in a healing ritual, they believe she was possessed by two spirits. The first the spirit of Chaos, wrecking heavoc through her mind. The second of companionship, which is where she gets her friendly side.

Kin: A mother and father who became loners due to their supposed embaressment of their daughter, Shift
Crush:
Mate:
Other: http://www.youtube.com/watch?v=Z2Seui... 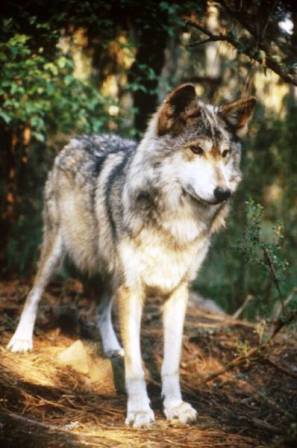 His eyes are a damp green, and his ears are tipped with black. His front left paw's pad is scarred from an accident that had happened not so long ago, and changed his rank from Hunter to Omega.
Personality: Seemingly carefree and useless, he is assumed to be lazy and unimportant, due to two things. His rank, and one action that led to infinite disgrace. In front of the pack, he is a cheery wolf with an ice-cold heart. Behind the scenes, he longs for just one friend that could tell him why his decision was so wrong.
With a caring and a high sense of morality, he is not the cold-hearted wolf with a smile as the pack seems to believe.
History: Once a Hunter with pride for his stealth in both hunting and combat, he would disappear and seemingly reappear wherever the target was not looking. But one day, he was up against an enemy he was never able to defeat... his own arrogance and pride as a Hunter. On a dare, he tracked down and attempted to kill a poisonous snake that was rumored to be the poisonous of them all. He underestimated the snake, and got bit. His reflexes were fast, but the scar was there to last forever. Because of endangering himself most dangerously, he was given a choice after he was healed-- Be exiled, or be stripped of the rank that was once his and be given the Omega rank.

Kin: Anyone?
Crush: Anyone?
Mate: Anyone?
Other: 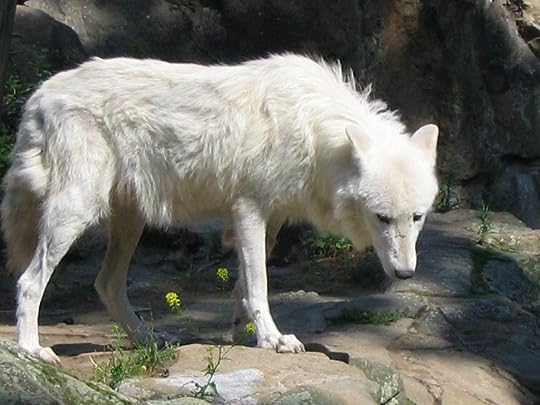 It's easy to see why he's called Snowfall-his fur is white and fluffy. When he was younger he resembled a marshmallow. He has dark brown, lazyish eyes. His claws are a little small, made up for by their sharpness. He hasn't lost any limbs, yet, but his left paw has been damaged and it's hard for him to run.

Personality: Snowfall is serious, but also patient-a skill much needed by someone who's job is caring for the pups. It's a surprise he's lived as long as he has, what with his naivety. He has the tendency to think the best of everyone and believe anything anyone elder than him tells him. He has a poor sense of humor and maybe, just maybe he'll get the joke the fifth time you tell it. He won't hesitate to tear the face off of anything proving to be a threat, even if it could cost him his own life in the process.

History: Snowfall's mother was injured while pregnant and died in childbirth. His twin sister fell prey to an older hungry loner wolf while the two were playing a little too far away from the pack in the forest. He considers it his responsibility to prevent the same thing from happening again, so it is for that reason he insists on sitting the pups and is a little overprotective of them. A while ago he permanently injured his front left paw in a fight with a wolf of the Siverlight pack (a fight which he lost, badly) and since then he hasn't been able to run.

Kin: His only sibling, Snowflake, who was eaten by an older loner wolf many years ago.

A teenager is about a year old or just over a year old.

Name: Accalia
Gender: Female
Age: 4 Years Old
Rank: Alpha-Female
Appearance: Accalia is a pure white she-wolf, with striking blue eyes. Her paws are tiny, as well as her figure, but she always carries an aura of warmth and love around her. She has a large bushy tail that streams out behind her, and her muzzle is slightly longer than the wolves native to this area. Another odd trait would be her rather large ears, but they prove very helpful when on team hunts. This beautiful she-wolf carries a single scar down her side, the length of a mouse. It's a simple raw pink line, devoid of any hair.
History: Accalia is obviously not native to the lands the wolves reside in now. She was born in another country, more specifically, Sweden. The wolves there were peaceful and kind, residing in tribes rather than packs. All the tribes were conjoined, all their threats were of equal meaning to the others. They did not believe in such a stupid thing as war, but they all knew how to fight.
Accalia was born a princess, as they called the alpha's offspring, of the Red Bark tribe. She was destined to be a howler, a wolf who speaks fluently in the traditional wolf tongue. Her songs were beautiful, and always used to communicate with the other tribes.
One day, foreign people came to her homeland. They were not the kind humans that were lightly scattered across her area. They carried strange accents, and stole a good portions of the wolves, meaning to repopulate them in their own country. She was dropped off here, and quickly joined in with the Starlight pack, as being alone is a wolf's worst nightmare.
She still carries her accent, as it is her only form of identity. Everything is slightly more pronounced with slight difficulty, and she lingers on certain words. As a young pup, when she first arrived, she was made fun of for her odd name and accent. She eventually grew used to it, but now she fully embraces herself.
Personality: Accalia is a truly sweet wolf, and is blessed with the wisdom of her tribe. She commonly knows how to solve problems, but she stays a bit more quiet than the average wolf. She tries to please everyone, even the other packs. She doesn't understand war that much, even now, but knows that her pack will need defending, and always fights her hardest. Her mother, Kipcha, told her to never provoke a war, but be able to finish one. There is still bloodlust in Accalia, as there is in every wolf, so she still has as much fighting power as any other.
Accalia loves pups with a passion, and plans to have her own someday. She originally took place as Omega, rising up to Pup-watcher. Only after she prevented a horrid war from arriving was she made Beta, and after the original alpha's death she received the rank she holds today.
Kin: Her family is large, but she prefers not to speak of them.
Crush:
Mate: Open

The Eye of the World (other topics)