This topic is about The Children in the Jungle
616 views
SOLVED: Children's/YA > SOLVED. 60's picture book - kids paint a jungle [s]

What I remember about this picture book is four children decide to paint a jungle on the wall of their room and the jungle comes to life. They are threatened by a tiger one of them had painted in the picture. Probably this is out of print, but I'd love to know the title/author if someone can help me.

not sure if this is what you're looking for, but there's a book called The Shelfpaper Jungle where two girls paint a jungle mural and they go on adventures in it. and then one of them moves away and they cut it in half and each keep a piece. sounds a bit different, though.

I have no idea which book this is, but the plot sounds a lot like ones written by Chris Van Allsburg. Check him out -- maybe it is one of his.

Lauren, that book sounds interesting! But it's not it. The story I'm thinking of has two boys and two girls. I may be wrong on this part, but I remember they were brothers and sisters.

Cathy, thanks! Definately not Van Allsburg, I read it in the 60's, and the pictures were much more simplistic than his style. More cartoonish.

But thank you both for trying! This one may be a long shot.

God. This sounds like an illustrated version of one of the stories in Bradbury's Illustrated Man (The Veldt)... don't know if any were ever done, though.

Sounds like the same concept as The Veldt, but that story had a brother and sister, not two girls. And of course, The Veldt had a far more sinister ending than the one Janis recalls here, so it's highly unlikely they would have made a children's book out of it.

There's a book by Margaret Mahy called Rooms For Rent (Franklin Watts, 1974) that might be what you're looking for. Here's the description from the NoveList database:
Kirkus Reviews: Mr. Murgatroyd the landlord "was small and shriveled and as bitter as medicine because of the mean, hard life he had led, and he talked to himself because of his loneliness," but even though he gleefully charges "too much" for his cobwebby rooms, he has no trouble renting them to "a little wispy woman with a wooden leg, a man who pushed his mermaid wife in a wheelbarrow, Mrs. Piper and her 20 children, and a black bear who plays the flute." Of course Mr. Murgatroyd grumbles when, once installed, Miss Wispy fills the place with plants, the children paint colorful jungle scenes on the walls, the bear plays duets with a brown bear violinist, and the mermaid's husband lures birds and butterflies to the house with crumbs and honey. However when the tenants all move out together in search of a more bracing and cheaper home, he finds the house so deserted that he hangs a "for rent free" sign on his door and hurries to catch up with them. Jenny Williams' cheerfully fanciful but minimally interesting pictures just barely fill the vacancies in Malay's unrenovated version of the greening of a grump.
(Kirkus Reviews, April 1, 1974)
What do you think? This book is 39 pages long, so it qualifies as a picture book. The first thing I thought of was Ray Bradbury's short story "The Veldt", but of course that isn't a picture book.

Thanks all! No Krista, it isn't "Rooms For Rent". But thanks anyway. The book I remember didn't have much - if any - beyond the kids deciding to paint a jungle on their walls. It had more of a "Where the Wild Things Are" sort of plot, very simple - kids paint a jungle, jungle comes to life, end of story. Although the pictures were much simpler. I don't believe there were any other characters, and there were no other plotlines. It also would have been published in the 1960's, since I had it as a kid.

I appreciate the effort though!

i read this too!! sorry i don't remember the name of it though :(

For some reason i can't think of what the pictures looked like....do you remember something about a father being involved as well?

Okay I was thinking of Bradbury's story...thats why i couldn't remember any pictures!

Janis wrote: "What I remember about this picture book is four children decide to paint a jungle on the wall of their room and the jungle comes to life. They are threatened by a tiger one of them had painted in ..."

Boy, does this sound familiar! Did you ever find your book?

I posted your query on another board and the book "The Children in the Jungle" by Leif Krantz was suggested by a member named Mamasquirrel. 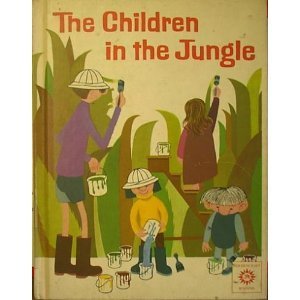 From an amazon customer review: "It tells the story of a bunch of bored kids who paint a jungle on their bedroom wall and then enter the picture. They manage to paint their way out of a number of scrapes, including painting a tiger chekerboard, which then causes the tiger to retreat from embarasment."

I also found this additional info on the book on Dav Pilkey's website: "Chief Goppernopper got his name from a book Dav Pilkey loved as a child. It was called The Children in the Jungle (1961) written by Lief Krantz and illustrated by Ulf Lofgren. The book is no longer in print, but it had beautiful, playful paintings--- some of which featured “The Goppernoppers”, a tribe of fierce warriors who were out to capture three children who had painted a jungle in their playroom."

Mod
Janis, was "The Children in the Jungle" your book? Sure sounds like it could be.