Sigh. Annnnd now Fox & Friends has something to yell about for the next God Knows How Long. Better than the millionth rehash of "Why Barack Obama is a Muslim," I guess. New Headline: "War on Jesus: DMV... or Satan Worshipping Demon Hell Hole?"

... I might actually agree with the last part, but for different reasons entirely.

I think the federal judge was right, and I do think you're right to be upset about it, because it was a bogus, ridiculous thing to try to do in the first place. However, I really can't bring myself to care about a license plate. If they don't put it on the license plate, they'll put it in Jesus stickers all over the back anyway. Which is probably another argument for why they shouldn't really care about the license plate. Also, can't you get non government issued ones that say the same thing?

Ugh. Its too early for this.

It was just a temporary injunction and the issue is probably not dead yet. If it goes to the Roberts Supreme Court it may be another 5/4 split reversal of this action. Wouldn't surprise me, anyway.

Sherri- I'm sorry for the earlier post. Just sort of a general frustration with this whole church v. state endless battle and the ridiculous lengths that people will go to to get around it somehow to try to beat the system. I do agree with you, like I said.

I hope its not reversed.

Mod
I really don't care if people want religious imagery on their license plates. What is wrong with people?? How incredibly petty is this??? If I lived in SC I'd be pissed they were spending my tax dollars on giving a shit about this.

I agree there is some grey here.

Mod
I has freckles, Larry. It's probably hard to tell with my Kali make-up on.

Sherri... I thought I was agreeing with you or I would have been less vehement in my post. : ) But I guess we disagree. If California wanted to offer religious themed license plates as one of the options, I really don't see that as being problematic. You can get ones that support the whales, or that protect national parks, or that feature palm trees. If they wanted to put a Jesus one in the line up I really wouldn't care, as long as it wasn't compulsory, and there were other options. Like KD says, they are for sale. Not funded by my tax dollars.

I don't know about the system in SC, but take a look at this list of vanity plates in Florida:

The annual fee for these plates go to private organizations. There are two problems I have with this. One - the large # of designs makes it harder to quickly see the actual number and state on the plate (the police here have complained about it, I believe), and two, plates have to be approved by the legislature - try getting a Islamic-themed plate approved.

Just have a simple design and buy a bumper sticker.

On closer examination, Charissa, I have spied the freckles. :)

Mod
I would totally have a Hello Kitty license plate. 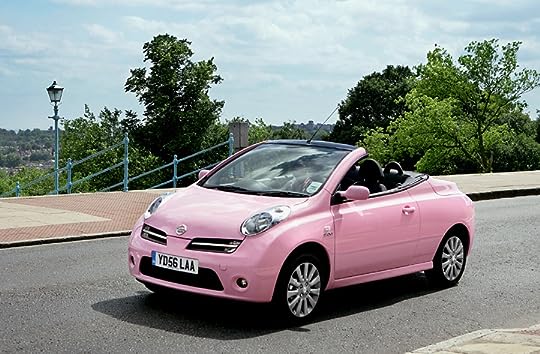 Mod
We should all get cars like that, and then we would be a pink car nation!

Hello Kitty is cute and Asian. Mary Kay is annoying and lives in suburbia.

Mod
But her skin is STILL as dewy as a twenty-year-old's!

Actually they stuffed her and mounted her in the Mary Kay Museum.

Hello Kitty is just a pussy with a bow.

I said they mounted her.

And after all, she still looks so young ....

I can't get away with anything.

Mod
It takes one to know one.

Mod
Yes, Larry, they can be very intimidating... Isn't it great!